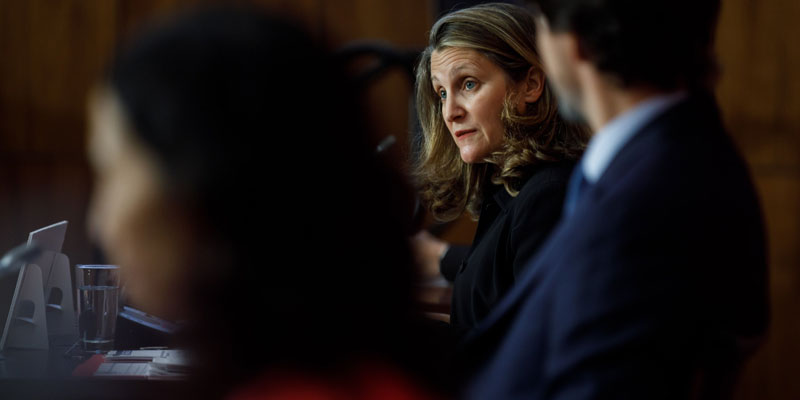 During COVID and the recession, the Trudeau government has been racking up debt at a record pace. Many analysts have raised concerns about the speed of this debt accumulation.

Key members of the government, including former finance minister Bill Morneau and current Finance Minister Chrystia Freeland, have argued that Canada can afford this level of spending and borrowing because it entered the pandemic in a stronger fiscal position than many peer countries. And it’s true that our federal government had a stronger balance sheet than most other developed countries. However, it’s important to understand the reasons why.

Many analysts point to the major fiscal reforms of the 1990s under Jean Chretien. By conducting a thorough review of federal programs and introducing substantial spending cuts, the Chretien government slayed a daunting deficit and set the country on a solid fiscal track.

However, a second, less-widely discussed reason for Canada’s comparatively strong position heading into this recession is the large net contributions to federal finances that came from Alberta in the preceding years.

And Alberta has been—by far—the largest net contributor to federal finances in recent history, primarily because of Alberta’s higher GDP, which generated more federal tax revenue (per person) than any other province. Without Alberta’s large net contribution, Ottawa would have accumulated much more debt than it did in recent years.

Once you add up the years, the scale of Alberta’s net contribution becomes clearer. For instance, between fiscal years 2014/15 and 2018/19, Alberta’s net contribution to Confederation was $94.9 billion. In other words, all the money coming in from Alberta saved Canadian taxpayers across the country from accumulating nearly $100 billion in debt over only five years. And that’s before you factor in the debt interest payments the federal government would have incurred on that extra debt.

Of course, this analysis only considers a five-year period. If you stretch the time horizon out further, Alberta’s net contribution becomes larger and larger.

Today, Alberta (to an even greater extent than most provinces) is in the midst of an economic crisis. If Alberta’s economy remains weak, the province’s net contributions to federal finances will become smaller with time. This is one reason all Canadians should root for a robust economic recovery in Alberta.

Bill Morneau and Minister Freeland are right when they say Canada’s federal government entered the pandemic with a stronger balance sheet than most of its peers. It’s important, however, to understand the reasons why. Alberta’s large net contributions to federal finances, year after year, have played major role in this reality.