The average Canadian family spends more than $37,000 per year on taxes 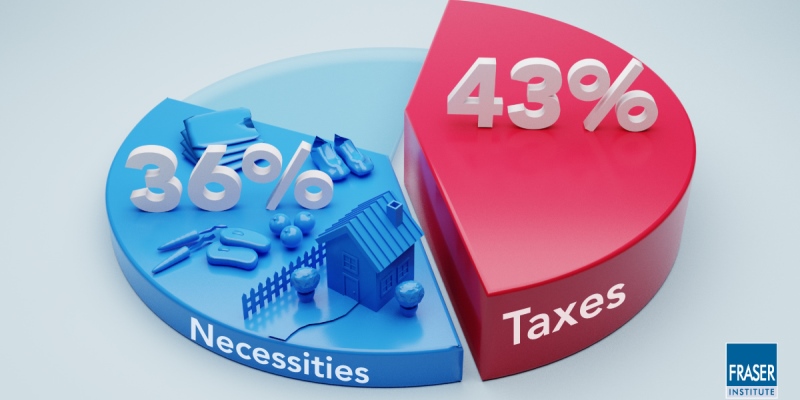 Have you ever wondered what the most expensive annual budget item is for the average Canadian family? If housing is the first thing that comes to mind, then you’d be surprised to find out you’re wrong. In reality, the average Canadian household spends more on taxes than any other single expense—more, in fact, than housing, food, and clothing all combined.

It’s easy to be misled into thinking that the income and payroll tax deductions on our paycheques are the extent of our tax burden. But that’s a mistake. To understand the full cost of taxation, you must consider all the taxes—both visible and hidden—that we pay throughout the year to federal, provincial and municipal governments including sales taxes, property taxes, fuel taxes, carbon taxes, import taxes, alcohol taxes and much more. All these taxes add up and make our family’s total tax bill expensive.

So how does the overall tax bill compare to housing costs?

Last year, the average Canadian family spent $17,856 on housing (including rent and mortgage payments), which is the equivalent of 20.8 per cent of its income. Put differently, the average family spends about half as much on housing as it spends on taxes.

In fact, taxes consume more of the average family’s income than all the basic necessities of life combined. If you add up the average family’s spending on housing, food, and clothing in a year, it comes to $30,597 or 35.6 percent of their income—still quite a bit less than what we pay in taxes.

It wasn’t always this way. The current situation represents a marked shift compared to 1961, the earliest year for which we have data, when the average Canadian family spent much less on taxes (33.5 per cent) than on food, clothing and housing (56.5 per cent).

Since 1961, the average Canadian family’s total tax bill increased by 2,112 per cent, dwarfing increases in annual housing costs (1,480 per cent), clothing (732 per cent), and food (625 per cent). Even after accounting for inflation, the tax bill has still increased 166.4 per cent over this period.

With 43.1 per cent of income now going to taxes, Canadian families are right to wonder whether they get the best value for their tax dollars. Of course, taxes fund important government services but we shouldn’t simply assume that higher taxes always provide better government services.

While it’s ultimately up to individual Canadians and their families to decide if they’re getting the best bang for their money, you must know how much you pay in total taxes to make an informed assessment.

That’s where these calculations help. They give an estimate of the cost of government for the average family. Armed with this knowledge, Canadians can then determine if they think they’re getting good value in return.

Bottom line—if Canadians are more informed about the true cost of government, they will be better equipped to hold government accountable for how it spends our tax dollars. And that leads to a more robust public debate about the overall tax burden and whether we’re getting our money’s worth.