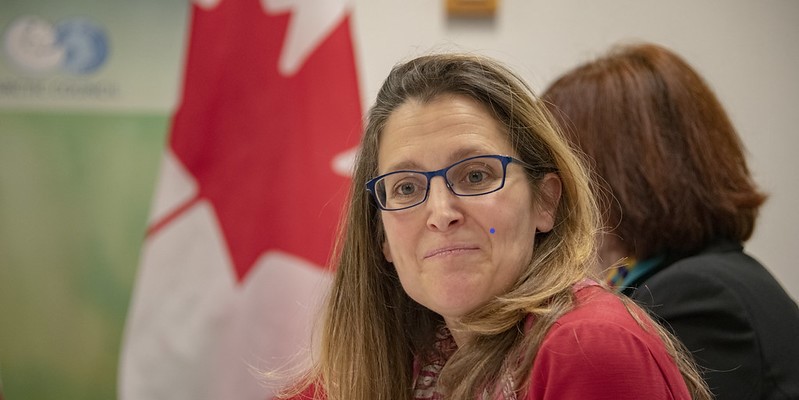 Recently, federal Finance Minister Chrystia Freeland commented on Canada’s inflation challenges and the recent federal budget. Unfortunately, many of these statements were misleading with Freeland doubling down on the Trudeau government’s approach to fiscal policy.

Responding to questions about the government’s approach to address inflation, Freeland repeated the claim that the latest federal budget was a “very fiscally-responsible budget.” But this claim bears little semblance to reality.

While the projected federal deficit declines from $113.8 billion in 2021/22 to $52.8 billion in 2022/23, this is not due to prudent spending or responsible financial management. Instead, the country’s economic rebound, high oil and gas prices, and high inflation allowed Ottawa to benefit from an influx of revenue. The latest government projections show that federal revenues will be more than $30 billion higher in both 2021/22 and 2022/23 than estimates in Budget 2021.

Despite this good fortune, the Trudeau government opted to increase spending rather than move more expeditiously towards a budget balance. In the 2021 spring budget, Freeland announced program spending for fiscal year 2022/23 totalling $411.9 billion. Only a year later, when the government delivered its 2022 budget in April, it planned to spend an additional $22.4 billion.

And the Trudeau government even added new spending that had nothing to do with COVID including new permanent programs such as national dental care and $10-a-day daycare were unveiled with at least several billion in annual spending planned. These programs will be financed entirely through borrowing, meaning the debt borne by Canadians will continue to rise. And the government has yet to introduce national pharmacare, which means annual spending will continue to climb in the future.

Now consider this. Had Freeland simply stuck to the original spending plan presented in 2021, the deficit for 2022/23 could have been 42 per cent lower than where we stand today and the government would be on track to run a surplus by 2025/26. Contrary to the rhetoric, the Trudeau government made little to no attempt to pump the brakes on federal spending and eschewed a fiscally responsible budget this year.

Freeland also claimed Canada has the lowest net debt as a share of the economy (GDP) among G7 countries. But this is misleading and requires further context. Using net debt as a metric favours Canada in international comparisons because it misrepresents our debt-to-GDP ratio. The figure cited by Freeland includes assets of the Canada and Quebec Pension Plans, which effectively lowers Canada’s debt levels. However, these pension assets are required to finance promised benefits to current and future retirees. So it’s misleading to make international comparisons using net debt-to-GDP ratios.

However, when we compare Canada to G7 countries using gross debt (total liabilities of government) as a share of the economy, Canada ranked fourth out of seven—not first—on debt-to-GDP in 2020. If we expand the analysis further to include 29 industrialized countries, Canada ranked 25th on indebtedness with only Japan, Italy, Portugal and the United States having higher levels of debt. This casts doubt on Freeland’s assertion that Canada has relatively low debt compared to peer countries.

Despite recent comments from Minister Freeland, the Trudeau government can do much more to tackle inflation and demonstrate true fiscal responsibility by constraining spending and debt levels.