Infrastructure a small share of the Liberal $29.4 billion deficit

A large portion of the increase in program spending for 2016/17—and thus the deficit—is due to increases in direct transfers to persons in the form of EI, children, and elderly benefits, which together are set to increase by $8.3 billion this year, more than double the new infrastructure spending. It’s difficult to see how this type of spending will meaningfully contribute to future economic growth.

Even within the $4 billion envelope marked as new infrastructure spending, it’s hard to see how much of the planned expenditures will in fact foster future economic growth. In principle, as the budget states, “by making it easier to move people and products, well-planned infrastructure can deliver sustained economic growth for years to come.” Infrastructure in the form of improved roads, highways, and bridges can typically work to that end. 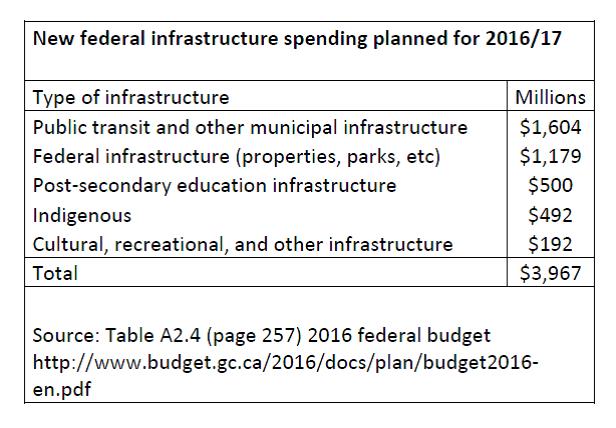 Moreover, as our colleagues recently pointed out, future infrastructure spending is set to take a similar pattern. Most of the $11.9 billion in spending characterized as new “infrastructure” over the five years outlined in budget is not going towards improving key infrastructure such as roads, bridges, and highways.

Throughout the budget, the government repeated rhetoric about building a prosperous economic future for the middle class and for Canada as a whole. The reality is that the government has dug a $29.4 billion dollar hole that does little to invest in future economic growth.