It's the Court's Constitution now 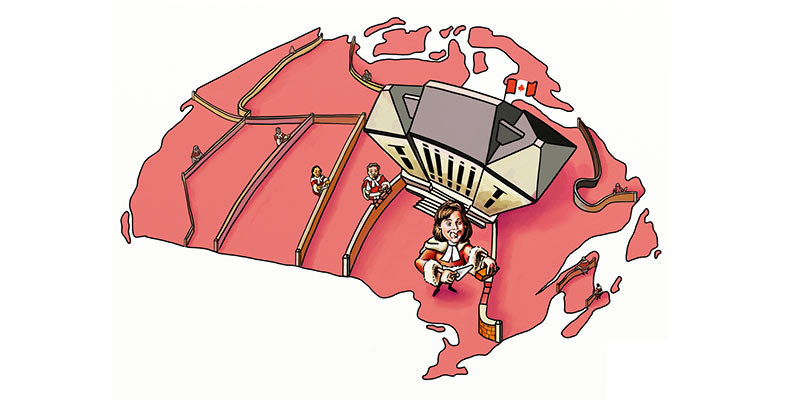 When President Donald Trump announced tariffs for Canadian steel and aluminum, Prime Minister Justin Trudeau was indignant. Trade barriers hurt everyone, he said, and imposing them on a friend is an insult. Pretty rich stuff from a country that cannot achieve free trade within its own borders. Provincial monopolies, supply management regimes and regulatory restrictions hinder the passage of goods between provinces. In the recent “free the beer” case, the Supreme Court of Canada regarded internal free trade as so dangerous that it ignored the clear words of the Constitution in order to avoid it.

In 2012, Gerald Comeau, a resident of New Brunswick, was fined for buying beer in Quebec and taking it home. A New Brunswick law gives the New Brunswick liquor corporation a monopoly on the sale of alcohol in the province. Comeau challenged the fine by citing section 121 of the Constitution Act, 1867, which says that goods will be “admitted free” from any province into any other. In its decision released this April, the Supreme Court shredded section 121 and left it for dead. Instead of striking down the restrictions in the New Brunswick statute, the Court said provincial governments can impede the flow of beer and other goods for any reason at all, as long as limiting trade is not their “primary purpose”. So much for economic union. To protect government from the perils of free trade, the Court remade the Constitution, and by extension the country, by rendering plain words impotent and substituting its own preferences.

So much for the rule of law.

Canada is built to be a free trade country. There are few Constitutional provisions stated more clearly than section 121. Historical evidence confirms that its purpose was to guarantee unrestricted passage of goods. In his oft-quoted speech of February 8, 1865, George Brown said that the idea behind Confederation was to “throw down all barriers between the provinces—to make a citizen of one, citizen of the whole.” But in Comeau, the Supreme Court feared that internal free trade threatened the modern regulatory state. If to be "admitted free" is a constitutional guarantee of free trade, the Court trembled, “the potential reach of s. 121 is vast. Agricultural supply management schemes, public health-driven prohibitions, environmental controls, and innumerable comparable regulatory measures that incidentally impede the passage of goods crossing provincial borders may be invalid.”

It was not the Court’s finest moment. The judgment is “legally wrong, historically flawed, metaphysically rotten and destructive. It is post-truth jurisprudence” says John Robson in a Financial Post comment. According to Professor Malcolm Lavoie of the University of Alberta, counsel for an intervener in the case, the Court’s decision “is not dictated by either the Constitution's text or its underlying principles.” Constitutional law scholar Leonid Sirota says the Court is the spoiled child of the Constitution, who throws tantrums whenever its parent does not conform to its demands. Columnist Andrew Coyne calls out the Court’s “shoddy reasoning, the tendentious reading of simple declarative statements, the selective approach to history, the willful naiveté… (and) the grating hypocrisy.”

The job of courts used to be to apply the law but not to make it. A judge, wrote U.S. Supreme Court Justice Benjamin Cardozo in 1921, “is not to innovate at pleasure. He is not a knight errant, roaming at will in pursuit of his own ideal of beauty or of goodness.” The Supreme Court of Canada has for years disagreed. It has insisted that the Constitution is a “living tree,” which gives license to interpret the Constitution “in a manner that is sensitive to evolving circumstances” (translation: we’ll do whatever we think is right).

The Court has done so on numerous occasions. It has invented a variety of Constitutional rights and requirements, including a Constitutional right to strike, a Crown duty to consult Aboriginal groups, and a government obligation to maintain, once established, injection sites for illegal drugs. These features are not found in the text of the Constitution, but are products of the Court’s roaming. Talented at finding things that are not there, the Court showed in Comeau that it’s also able and willing to ignore things that are. In preferring protectionist measures to free trade, it placed aside the words of the Constitution to protect its own vision of the proper role of government and to validate its conviction that free trade is for dummies.

Economic union? Plain meaning? Historical evidence? Original intent? Not for us, the Court sniffed. The Constitution is a “living tree,” don’t you know, and we will protect government from the perils of free trade. Surely you did not expect Canada’s Constitution to mean what it says.