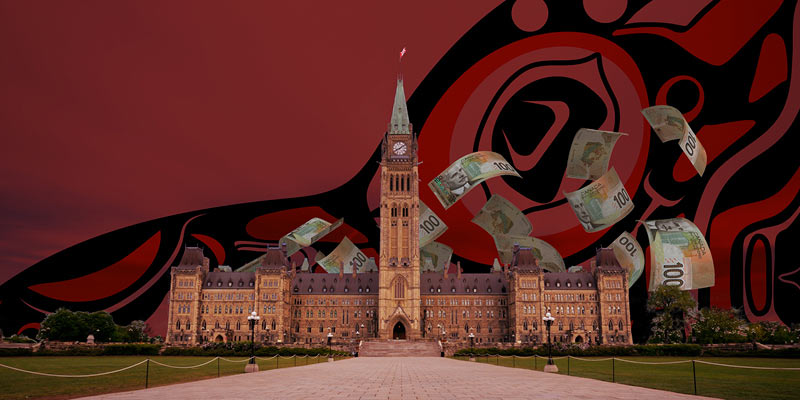 From the fiscal crisis of the mid-1990s to the end of Stephen Harper’s Conservative government in 2015, federal spending on Indigenous programs grew at a compound annual rate of 2.5 per cent in inflation-adjusted dollars. In the name of reconciliation, the Trudeau government has more than doubled that rate of increase since 2015.

In fact, federal budgets project a total increase of at least 50 per cent by fiscal year from 2015-16 to 2021-22. As outlined in my new study published by the Fraser Institute, spending totals from the “main estimates” and the public accounts suggest that actual increases in Indigenous spending are even higher than budgetary projections. Indigenous spending is now the federal government’s second-largest operating program expense (that is, a program that performs functions other than transferring money) behind only national defence.

Meanwhile provincial expenditures on Indigenous purposes, although still small compared to federal outlays, continue to increase even more rapidly than federal appropriations. Own-source revenues earned by First Nation governments through their business activities also continue to increase. Taken together, these trends mean that far more money is being spent in the name of Indigenous peoples than we’ve seen for 25 years—though the majority of spending goes to civil servants and consultants, not Indigenous people themselves.

The stated goal of reconciliation through increased spending on government programs is to attain economic equality between Indigenous people and other Canadians. Yet there are serious questions about the effectiveness of these programs. The most highly-touted promise of the Trudeau government’s 2016 budget was to eliminate all long-term water advisories on reserves by March 2021 (at a cost of $1.8 billion). But we now know that deadline will not be met, even though the estimated expenditure has more than doubled. The flood of money has not overcome the intractable problems of small size, remote location and lack of economic pricing for water and sewerage.

Another high priority is education, and federal budgets have promised additional hundreds of millions for school operating expenses and capital construction. Of course, money can pay for higher teacher salaries and nicer buildings, but not necessarily better education results. Renowned Cree educator Waubageshig has identified parental support as the crucial variable. “If a majority of parents continue to low-ball education success and achievement,” he said, “their children will, too.”

Housing is a third area where large additional amounts of money are to be spent. It is always possible to build more homes, but their useful life will be short without private ownership or rental. Government-owned housing is a recipe for long-term failure because it does not create incentives for further investment and maintenance. As with clean water and education, more money may be helpful in some ways, but inadequate funding is not the root of the problem.

How do we know this? Because if better-funded government programs were the answer to Indigenous poverty, we would have seen the results by now. Between 1981 and 2016, the latest year for comparable data, Ottawa multiplied total federal spending on Indigenous programming by more than four times yet the gap between First Nations and other Canadian communities in the average Community Well-Being Index, which measures the well-being of individual Canadian communities, barely budged. In 1981, the gap was 19.5 points on a scale of zero to 100. In 2016, it was 19.1.

The biggest single problem facing First Nations is lack of economic opportunity. Fully 70 per cent of First Nation communities are located more than 50 kilometres from the nearest town or city, and almost 20 per cent have no all-weather road connection. As a result, development of natural resources such as forestry, oil and gas and minerals remains by far the best hope for prosperity for remote First Nations.

Overcoming distance requires infrastructure, including roads, railways, pipelines, powerlines, communication towers and harbours. Governments may have to build some of these facilities, but in many other cases private investors would take on the job if only governments would get out of the way. Better transportation and communication to enhance economic opportunities for Indigenous peoples in remote locations is a more promising path out of poverty than more government programming.