Nobody has a serious pro-growth tax plan for Ontario 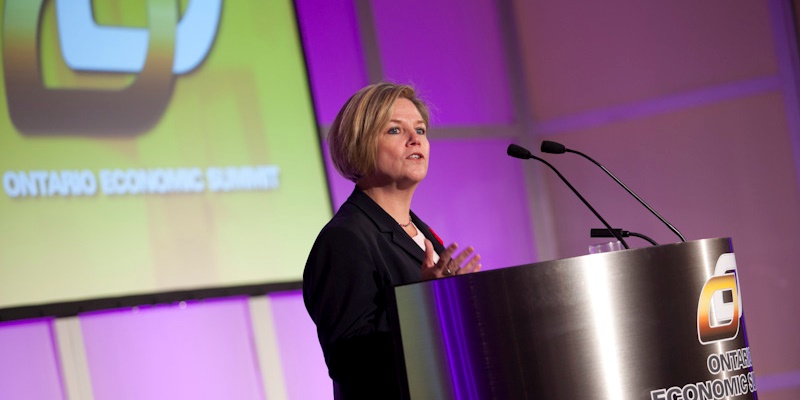 The Ontario New Democratic Party recently released its tax plan for the province. A robust discussion of tax policy would be welcome, as Ontario is in serious need of tax reform. Unfortunately, far from boosting Ontario’s economy, the NDP plan would undermine Ontario’s economic competitiveness and the province’s growth prospects.

For example, the NDP’s proposal to increase the province’s personal income tax rate by one percentage point for Ontarians earning more than $220,000 per year. “Let’s ask those at the very top to pay a bit more,” said party leader Andrea Horwath (pictured above) at her election platform launch.

But here’s the problem with asking upper-earners to pay a “little bit more” in Ontario—they already pay the second-highest marginal personal income tax (PIT) rate in North America, thanks to recent provincial and federal tax hikes. For top earners in the province, 54 cents (combined provincial and federal taxes) of each additional dollar earned in labour income is taken in income tax. On top of that, a 13 per cent HST is paid on the consumption of goods and services.

This is something former national NDP leader Tom Mulcair understands. During the last federal election, Mulcair said he was “firmly opposed” to PIT increases, warning high PIT rates would make it more challenging for Canadian provinces to attract mobile professionals such as physicians.

Unfortunately, if elected in June, the NDP in Ontario seems poised to push forward with even higher personal income tax rates, which would discourage economic growth while making it harder to retain and attract top talent.

Equally troubling is the NDP’s promise to increase the province’s corporate income tax (CIT) from 11.5 per cent to 13 per cent, which would move the province from the 14th lowest to 36th lowest combined provincial/state and federal CIT rate in North America, leapfrogging Alberta and British Columbia. Mountains of economic research shows the CIT does more economic harm per dollar raised than nearly any other type of tax. If an NDP government wants to help grow the provincial economy, raising the CIT would be counterproductive.

Raising both personal and corporate income tax rates now would be particularly damaging, given recent tax cuts in the United States. Ontario once enjoyed a business tax advantage over most U.S. states. But this advantage was largely eliminated by reductions in the U.S. federal CIT and top PIT rates. An increase to Ontario’s CIT would make it even harder for the province to attract investment, something Ontario has struggled with for many years.

Some may push back by claiming that raising the CIT is still a good idea because only “the rich” will pay—by which they might mean owners of large companies. Nothing could be further from the truth. Evidence clearly shows that ordinary workers ultimately wind up paying the tax, largely in the form of reduced wages.

Ontario badly needs new policy ideas that will make us more competitive for investment and help drive economic growth. Unfortunately, on tax policy, no party has yet presented such a plan. And the NDP’s plan would, in fact, have precisely the opposite effect.