Ontario and Quebec, Canada’s two largest provinces, recently released their fall updates on the state of government finances. The updates highlight a marked distinction in the progress that each province has made in terms of deficit reduction. Whereas Ontario continues to run large budget deficits, Quebec is on track to eliminate its deficit and return to a balanced budget this year. As a result, Ontario’s debt burden continues to grow and will soon be, on a per-person basis, larger than Quebec’s.

Government debt can pose serious economic problems. A robust body of research finds that high levels of government indebtedness hinder long-term economic growth. In the short term, growing debt can require more government revenue to pay interest on servicing past debt rather than important spending programs such as health care and education, or even tax relief.

Ontario and Quebec currently spend between nine and 10 cents out of every government revenue dollar on debt service payments. A growing debt burden could cause the share to rise, other things equal.

Let’s be clear: neither province is a model of fiscal prudence. They are, after all, Canada’s two most indebted provinces. And Quebec’s longstanding fiscal problems are well-documented. In fact, Quebec’s net debt (after adjusting for financial assets) is projected to be 49.7 per cent of GDP this year, the highest among all provinces and American states.

Although the province continues to carry a large debt burden, there are encouraging signs that Quebec may finally have turned a corner, with the recent fiscal update projecting that the province will balance its books for the first time since the recession and then run a string of balanced budgets. With its annual deficit eliminated, Quebec is now in a position to begin reducing its debt burden.

The situation in Ontario is markedly different. Ontario expects to run a cumulative $12 billion deficit this fiscal year and next. The government says it will finally balance the budget in 2017/18 but its plan to do so remains precarious and unlikely, as its own Financial Accountability Office has noted.

Even taking the government’s hopeful projections at face value, Ontario will continue to rack up debt in the coming years—so much so that Ontario will soon overtake Quebec in terms of net debt per person. In 2009/10, Quebec’s per-person net debt burden reached $19,329, approximately $4,400 higher than Ontario’s. That gap has shrunk considerably and is projected to be just $1,100 this year.

The latest government projections suggest the gap will continue to shrink next year and then, in 2017/18, Ontario’s per-person net debt will finally exceed Quebec’s at $22,647 (see chart below). While Quebec's per-person debt burden remains substantial, Ontario's will soon be larger. And again, the projections for Ontario are likely optimistic. If the government’s hopeful forecasts do not come to pass, Ontario’s debt per person will grow even larger. 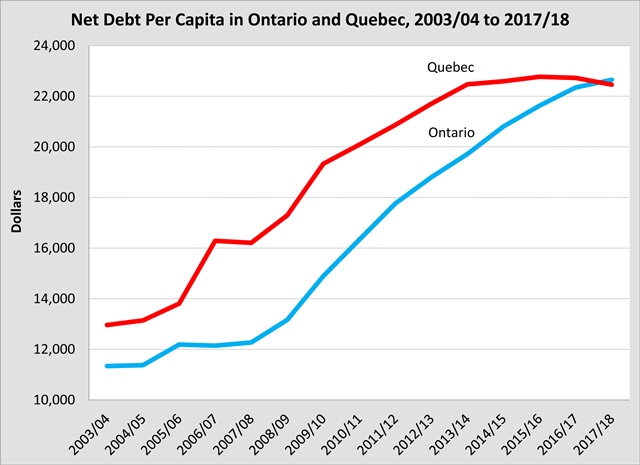 Examining the debt burden in each province relative to the size of the economy provides further evidence of Ontario converging quickly with Quebec. Quebec’s net debt as a share of GDP is projected to fall from its current level of 49.7 per cent to 43.0 per cent by 2019/20. Meanwhile, Ontario expects its debt-to-GDP ratio to hover very close to its current 40 per cent level for the near term.

Quebec is hardly a paragon of fiscal virtue, but its recent progress has enabled the new government to start a much-needed discussion about tax reform including a commitment to reduce the general corporate tax rate. Ontario, on the other hand, continues to enact new tax increases.

While Quebec certainly has more work to get its fiscal house in order, Ontario is headed on a path that will see its per person debt burden exceed that of La Belle Province.