Admiral Norman and the cost of military contracts 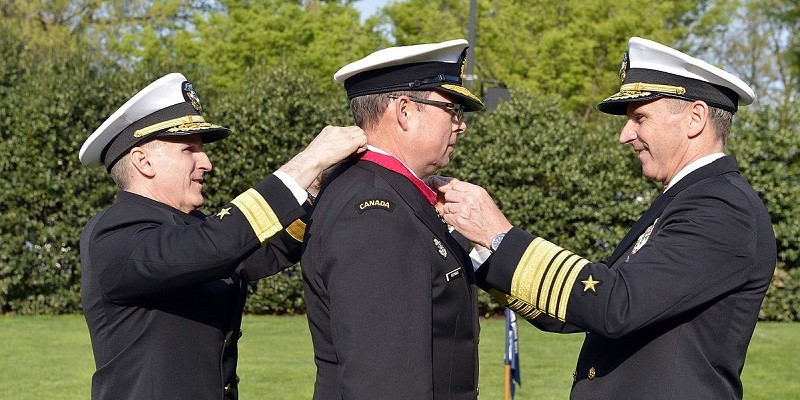 It would be interesting—maybe the auditor general will have a look—to know just how much the two-plus years of the investigation and prosecution of Admiral Mark Norman (above, middle) cost the federal government. The charges against him, which were dropped this week, involved his alleged leaking of the Trudeau government’s decision, on first coming into office, to delay a Harper government contract for the refitting of a commercial container ship as a naval supply vessel—leaking it not to any foreign power, mind you, but to the CBC and to the contractor itself. As the trial judge said, he’s presumed to be innocent and remains so.

Cost calculations of this sort are always tricky. Most of the lawyers and investigators involved in the case were government employees, so unless they did overtime they would not otherwise have done, the government didn’t experience an increase in overall spending as a result of their efforts. The dollars paying their salaries would have been spent whatever they were working on so the real cost (as always in economics) was an opportunity cost: The hours—tens of thousands of them, presumably—that went into the case of Admiral Norman didn’t go into other cases. In theory you’d want to have some idea of the social value of these cases not worked on and then compare that to the social value of the Norman case. As the public interest in the Norman case was to discourage the leaking of information in a city that essentially runs on leaked information, it’s not obvious it had much social value at all.

We obviously don’t want our military higher-ups leaking information to our adversaries but the sworn enemies in the Norman case were not Russians or Chinese or Iranians but Davie Shipbuilding and Irving Shipbuilding and the dispute was over whether a previously sole-sourced contract to have Davie provide a supply ship would be reopened so others, including Irving, could bid on it.

It thus embodied the very worst of Canadian Procurement Syndrome. As my colleague Matt Gurney described in a wonderfully caustic column in the National Post this week, what seems to matter most in this country is not how well any military equipment ordered can do the job and with what timeliness, but rather in which part of the country, down to which electoral riding, it gets built. When our soldiers, sailors and airmen can’t do their jobs because their equipment isn’t ready or up to scratch, I hope it’s consoling to them that at least it has provided “jobs for the boys,” in that fine old Mulroney-era phrase.

As it turned out, the ship Davie ended up building came in, we have been told repeatedly, “on time” and “under budget,” both of which are highly unusual. “On time” is especially shocking. If the Wright brothers had been working under contract to the Canadian Forces, mankind might still be flying around in balloons. That the contract was fulfilled on schedule presumably had something to do with the fact that the ship didn’t have to be rebuilt from scratch but was instead transformed from its original incarnation as a commercial vessel.

“Under budget” is also both novel and commendable but doesn’t seem quite such an accomplishment once you realize the budget was $700 million—i.e., almost three-quarters of one billion dollars. For one ship, and a supply ship at that.

Renovations are always costly and often subject to nasty and expensive surprises, as any homeowner who’s been through one can attest. But if your budget is $700 million, you really should be able to meet it. Yes, times change, inflation never ceases and a dollar isn’t worth what it used to be. But still, Seven hundred million dollars is a lot of money. As there are currently more than 37 million of us in Canada it works out to almost $19 per man, woman and child.

These days GDP per capita is a little over $60,000 so it would take 11,650 Canadians a full year of work to produce $700 million of GDP. Federal taxes average a little under $9,000 per year per man, woman and child so $700 million represents the taxes paid by almost 83,000 Canadians—which is just a little more than the population of Peterborough. Maybe the new supply ship should have been called the “Peterborough,” and citizens of that city entitled to free boardings whenever it’s in port.

In fact, the ship is called the Astérix, which means “little star” in Greek but has much wider meaning to tens of millions of fans of the beloved and redoubtable Gallic cartoon warrior of that name and his powerful but not-very-smart sidekick Obelix, who in the days of Julius Caesar together manage to keep their Breton (not Norman) village free from Roman occupation. As all fans will recall, one of Obelix’ favourite phrases is “Ils sont foux, ces Romains,” meaning “They’re crazy, these Romans.”

Anyone following the Norman case closely would have to conclude: “Ils sont foux, ces canadiens.”