A recent study by the Fraser Institute detailed the scope of Alberta’s outsized contribution to the Canadian economy in recent years. One of the key aspects of that contribution has been Alberta’s role in driving the country’s economic growth.

The study reveals that for the past dozen years, and especially during the recent oil boom, rapid growth in Alberta accounted for a disproportionate amount of economic growth in the country as a whole.

So just how big was Alberta’s contribution to Canada’s economic growth?

The first chart below shows Alberta’s contribution to Canada’s GDP each year between 2004 and 2014. Alberta’s portion of national GDP growth varied considerably from year to year, from a low of 9.4 per cent in 2007 to highs of over 42 per cent in both 2006 and 2012 (excluding 2009, when the national economy shrunk), averaging 26 per cent of Canada’s real GDP growth each year during that period. This is a huge share considering that Alberta accounted for less than 12 per cent of the country’s population during that period. 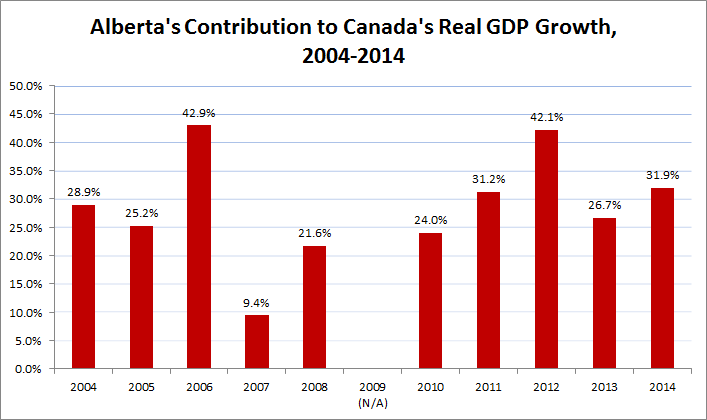 Alberta constituted such a large share of national GDP growth because its own growth far exceeded those of the other provinces over the 2004 to 2014 decade. During that time, Alberta’s annual GDP growth averaged 3.4 per cent. As shown below, that figure put the province almost a full percentage point ahead of the second fastest growing provinces, Manitoba and British Columbia, which both posted an average of 2.5 per cent GDP growth during that time. 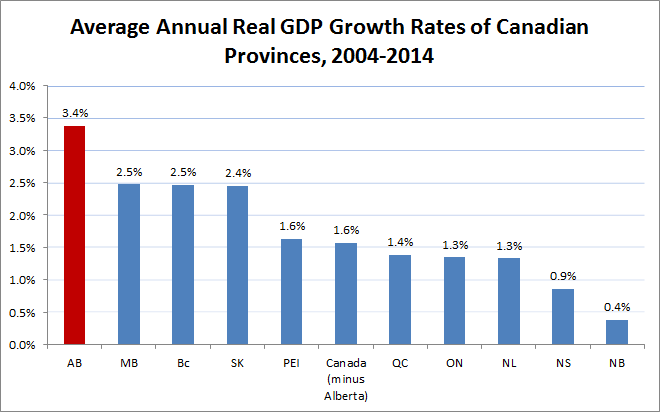 Alberta’s 3.4 per cent growth also put it far above the average of the nine other provinces (i.e. Canada without Alberta), which amounted to just 1.1 per cent GDP growth. That large disparity in growth rates underscores just how much Canada’s economic growth in recent years was powered by Alberta. In fact, without Alberta, Canada’s growth rate since 2010 would have been slightly less than that of the United States.

Alberta’s strong economic growth over the past decade is a clear indication of how central the province can be to Canada’s economic performance. The evidence shows that without Alberta’s rapid growth, Canada’s recovery from the recession of 2008 would certainly have been more sluggish. So it should be a concern to Canadians across the country that Alberta’s economy has struggled in recent years, since the last decade made it clear that a prosperous Alberta is essential for a prosperous Canada.