Premier Rachel Notley's NDP government inherited a difficult set of fiscal circumstances when it came into power just over two years ago. The new government faced a big budget deficit, caused by a combination of rapid spending increases over the preceding decade and a steep decline in the price of oil in 2014.

Unfortunately, instead of taking action to address the serious fiscal challenges it inherited, Premier Notley's government has made matters worse through its spending decisions. Rather than reining in excesses, the new government has doubled down on spending increases, leading to ballooning deficits for the foreseeable future. That is a choice that the provincial government could have avoided, which will result in billions of dollars of extra debt accumulation over the next several years.

To illustrate just how rapidly program spending has increased since the Notley government took power, consider the figure below. 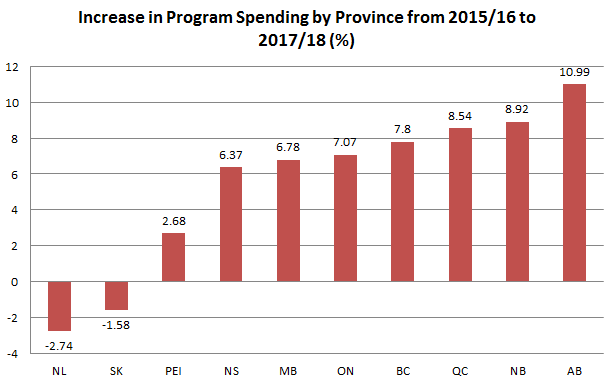 Between 2015/16 and 2017/18, program spending in Alberta is projected to increase by roughly 11 per cent. That's a faster rate of spending growth than any other province in Canada over this period.

For a more useful contrast, consider neighbouring Saskatchewan, which is also grappling with the fallout from decreased commodity prices. Rather than rapidly increasing spending, the province had decided to modestly reduce spending to help close its budget gap. Had the government of Alberta matched Saskatchewan, trimming 1.58 per cent of program spending during that period, the provincial government would be projected to spend roughly $6 billion less in 2017/18, which could have meant shrinking this year’s deficit by around 50 per cent.

Under this scenario, and assuming continued restraint going forward, Alberta would be just a year or two away from a balanced budget. Instead, the government's current plan calls for deficits to persist until 2023/24, and would only be eliminated then if rosy oil price and revenue forecasts come to pass.

While the Notley government cannot be blamed for the choices of past governments, or for the economic challenges it inherited, it does have policy levers at its disposal to limit debt accumulation and repair the province’s finances. Instead, it has to date gone in the opposite direction, rapidly increasing program spending, contributing to historically large deficits.

With two years remaining in its term and with the recession over, the government should chart a course to restore budgetary balance, rather than continue to run up the provincial debt.