A recent Fraser Institute study demonstrated that Roy Romanow’s NDP government in Saskatchewan during the 1990s is a useful model for Rachel Notley’s NDP government in Alberta to follow in its efforts to eliminate a large budget deficit inherited from its Progressive Conservative predecessor. By reducing and reforming spending, Romanow’s government was able to quickly restore the province to fiscal balance.

Notley’s government has now tabled its first budget and, unfortunately, it failed to take similar action. Consequently, the province can expect the deficit to persist over the next few years.

The Romanow government proved that an NDP government can take decisive action to successfully eliminate budget deficits. Romanow’s NDP government cut program spending by 10 per cent over three years in order to restore the health of provincial finances. This approach eliminated the deficit and laid the foundation for substantial tax reform.

The Notley government chose not to follow Romanow’s successful example and instead increased spending. Yesterday’s budget projects program spending in Alberta will increase 3.1 per cent in 2015/16 (with a deficit of $6.1 billion). Spending increases in the next two years are slated to be more modest—2.2 per cent and 1.6 per cent, respectively (the deficit projections are $5.4 billion and $4.4 billion). From 2014/15 to 2017/18, program spending is projected to increase from $47.6 billion to $51.0 billion (see chart below). 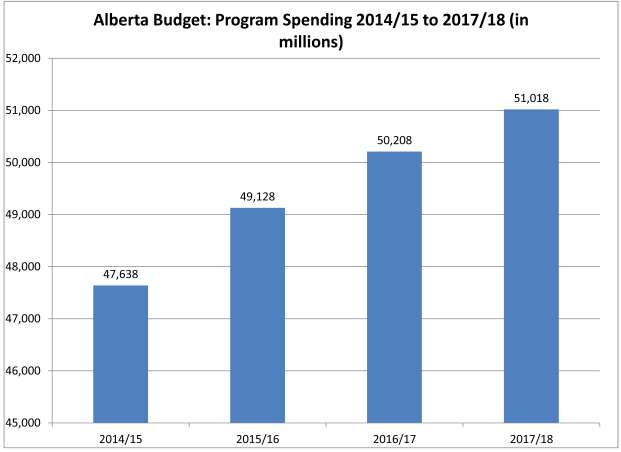 Instead of reducing and reforming spending as Romanow did, the Notley government seems to be more closely following the example of Bob Rae’s NDP government in Ontario, in that it is trying to deal with the deficit by raising taxes.

When the Rae government inherited a large deficit during the 1990s, the government chose to increase spending and enact a barrage of tax hikes. This approach ultimately failed, as the economy performed poorly and revenue growth was insufficient to pay for spending increases. The Rae approach led to even bigger deficits and a near doubling of the province’s debt as a share of GDP over the course of its mandate.

The Notley government appears poised to repeat Rae’s mistakes. In addition to spending increases, the government is proposing new tax increases (on fuel, tobacco, alcohol, and insurance premiums) on top of the hikes to personal and corporate income taxes that have already come into effect.

Rapid spending growth is responsible for Alberta’s deficit. To restore the province to fiscal balance as quickly as possible, Notley’s government can learn from the example of its 1990s era cousins in Saskatchewan and work to reduce and reform spending in the province.