According to Alberta Finance Minister Joe Ceci (pictured above), the Notley government won’t alter its fiscal plan even if credit agencies again downgrade the province’s credit rating. This is troubling, as it means that Alberta will likely continue the rapid run-up in provincial debt that’s been taking place over the past several years.

Indeed, the most recent budget calls for the province to run a $10.3 billion deficit in the 2017/18 fiscal year, and deficits averaging about $8.5 billion per year over the next two fiscal years. As a result of these big deficits and other borrowing to finance capital expenditures, the province will see its net financial debt climb by a staggering $35.4 billion between now and 2019/20.

One immediate consequence of this rapid debt accumulation already being felt by Albertans today is an increase in provincial government debt interest payments. As the government relies on increased borrowing to finance its string of deficits and other expenditures outside the operating budget, it needs to set aside more and more money every year to pay interest to its creditors.

Last year the government spent more than $1 billion to service the interest on its debt—that’s more than $240 for every person in the province. With the cost of servicing Alberta’s debt projected to nearly double by 2018/19, the per person cost will increase substantially in a short period of time. As the chart below shows, the cost per Albertan is projected to jump to $515 by 2019/20—more than double the cost from 2016/17. 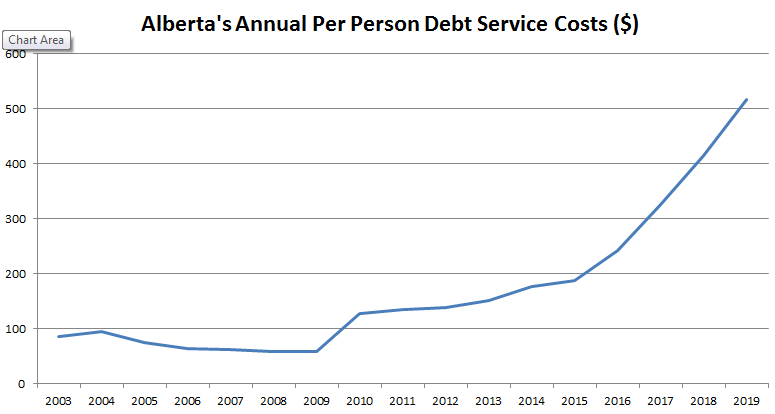 Ordinary Albertans will feel the pain of increasing debt service costs. The government will need to set aside more and more money every year to pay off interest on its debt—funds that could otherwise be spent on other priorities such as health care, education or tax relief. If the province suffers another credit downgrade, the situation will only get worse, as a credit downgrade will bring the risk of higher borrowing costs, meaning even higher debt servicing costs.

Alberta currently carries less debt than any other province, and therefore has lower debt service costs than other jurisdictions in Canada. However, the debt servicing costs already being borne by Albertans are not trivial and the trend shown in the chart above is worrying. Provincial debt service costs in Alberta are rising quickly ever year, placing a bigger and bigger burden on Albertan taxpayers.

Minister Ceci’s decision not change course on Alberta’s debt could put a strain on future budgets, and make less taxpayer money available for government services that would benefit all Albertans. If the provincial government fails to limit debt accumulation, those costs will increase, especially if rating agencies continue to downgrade Alberta’s credit rating. Corrective action now can help to avoid saddling the next generation of Albertans with a heavy debt burden.