Are deficits the new normal in Alberta?

The Notley government introduced its long awaited first budget today, and in line with expectations, the budget forecasts a $6.1 billion deficit for this fiscal year. The budget also forecasts deficits in the next three years, which will total $11.9 billion. In nominal terms, this year’s is the largest budget deficit in the history of the province. While the size of the deficit will get much attention, we should also be concerned that Alberta is on track to record 10 budget deficits in 11 years (see below table). This isn’t a one-time blip; budget deficits seem to be the new normal in Alberta.

Persistent deficits over the past eight years have led to a significant decline in Alberta’s net financial assets. Today’s budget revealed that the province will return to a net debt position next year, where the total value of government debt exceeds financial assets. 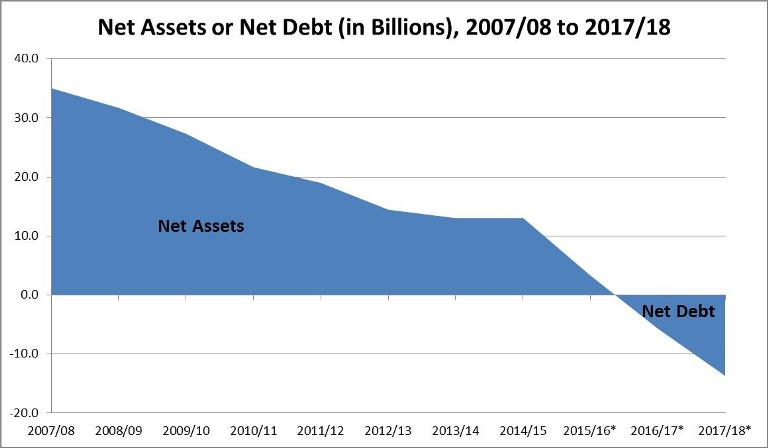 The government must address chronic deficits sooner rather than later so it can re-focus on tax competitiveness and saving for the future. While Finance Minister Joe Ceci (pictured at top of page) blames oil prices for Alberta’s deficit, in reality the province has run surpluses when oil prices were much lower than today (adjusted for inflation), and failed to balance the budget in years when oil was over $90 per barrel.

The real culprit for the deficit is a rapid increase in government spending over the past decade. In other words, successive governments have been unable to control spending when times were good and therefore have been ill prepared for the bad times. Failure to address the roots of Alberta’s chronic deficits will prolong Alberta’s path back to a balanced budget.