As the federal budget looms, the government’s credibility remains questionable

The federal budget on March 22 will be a keenly watched document for a variety of reasons. One can expect a ramping up of government spending based on the promises made in the Liberal election program for new initiatives in areas like infrastructure, jobs and training, indigenous peoples, health, and the environment. Of greater interest will be what exactly the federal government’s deficit will be in light of the changing economic environment and the government’s spending plans.

The chart below plots a variety of numbers for the federal government’s deficit. First, there’s the actual deficit for the period 2007-08 to 2014-15 as obtained from the Federal Fiscal Reference Tables. Then we have the Spring 2015 Budget, which forecast surpluses rather than deficits for the period from 2015-16 to 2019-20. More than a year ago, the fiscal narrative was about the coming era of federal surpluses and commentary pages were filled with discussion of what plans should be made for them. 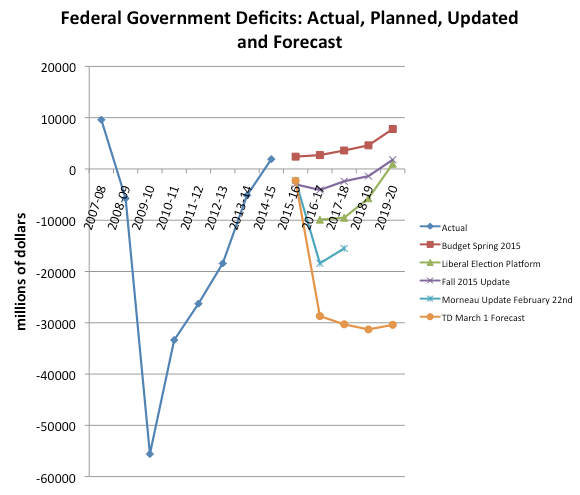 By the fall, a slowing economy made the prospect of deficits a possibility and the Liberal Election campaign released its plan to run “modest” deficits of up to $10 billion annually for the first three years of its mandate with a balanced budget by 2019-20. Of course, the period of post-election euphoria quickly subsided when it came to fiscal matters with the story that the economy’s performance was now worse than expected given the collapse in oil prices and the prospect of larger deficits was in view.

So the Fall 2015 Fiscal Update painted a picture of deficits rather than surpluses—even before the planned Liberal spending measures. Moreover, Finance Minister Morneau took the curious step of updating some of these numbers yet again in late February and showed an even larger forecast deficit for 2016-17 and 2017-18—before the anticipated spending of the March 22 budget is factored in.

By the spring of 2016, the country’s fiscal outlook had worsened further. This deterioration in the federal fiscal outlook was reflected in the March 1 forecast of the projected future of federal deficits from TD Economics (shown in orange), which includes estimates of platform commitments of new spending. The TD forecast shows a persistent federal deficit of approximately $30 billion a year for the foreseeable future.

A key question for next week’s federal budget is not what the estimate of the coming budget deficit is going to be, but why we should even believe it?