Based on Ontario's experience, Alberta should proceed cautiously with wind, solar, etc.

The new climate strategy calls for:

• A complete phase out of coal-fired electricity generation by 2030

• Increase the use of natural gas

It’s unknown what exactly the impact of these policies will be on Alberta, although the experiences of other jurisdictions like Ontario suggest some impact on electricity prices can be expected. Ontario’s experience with renewables can offer some important lessons for Alberta.

In 2009, Ontario embarked on its Green Energy Act (GEA), which subsidizes renewable electricity (wind, solar, etc.) by providing producers long-term prices at above market rates through a Feed-in-Tariff system. Estimates from one study that analyzed the impact of renewables on electricity prices in Ontario found that, from 2009 to 2015, total annual power costs have risen by more than 30 per cent. And all the wind and solar installed by the province only accounts for four per cent of Ontario’s electricity, while amounting to 20 per cent of the average commodity cost. This is a high cost for not much electricity.

These high electricity costs have put Ontario at a competitive disadvantage compared to other manufacturing-heavy U.S. states and one recent survey of business owners found that 38 per cent expect to see reductions in their bottom lines due to high electricity costs. This outcome would likely result in delays or cancellations of investment in the province.

Ontario’s experience should serve as a warning to Alberta. In the end it should be markets that dictate the provinces electricity mix—not governments mandating which forms of electricity generation get adopted. Natural gas is an abundant and reliable form of electricity, with costs expected to remain low in the future (see chart below), particularly if production levels continue to remain high according to data from the U.S. Energy Information Administration. 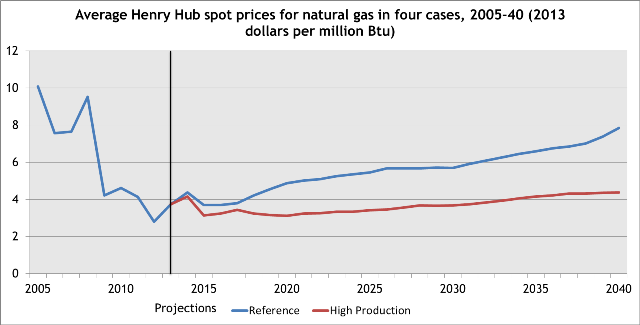 Natural gas also has considerable benefits in terms of reducing CO2 emissions from electricity, if it displaces coal, in a cost-effective way.

In the United States, the substitution of coal-fired electricity plants with natural gas generation has made a significant contribution to reducing CO2 emissions across the country, as new high-efficiency natural gas plants can result in emissions 63 per cent lower than older coal plants and 50 per cent lower than newer, more efficient coal plants for the same amount of electricity generation.

Indeed, switching from coal to natural gas for electricity, in the presence of low natural gas prices, is estimated to be responsible for 19 per cent of the 1,022 million tons reduction of CO2 emissions that has taken place in the U.S. since 2007.

This low-price environment has been made possible by the shale gas revolution, which is powered by safe hydraulic fracturing.

Based on Ontario’s experience, Alberta may want to proceed cautiously with implementing large amounts of renewables in the wake of coal plant closures. Natural gas can provide a reliable and affordable alternative to coal, which can also lead to reductions in CO2 emissions.