This Labour Day, while many Canadians and Americans spend time with friends and family, Canadian workers have less to celebrate than their American counterparts, as provincial labour markets have performed poorly compared to U.S. states in recent years.

To properly judge the strength of Canada’s labour market, we must look beyond the headlines about how many jobs were created last month or whether unemployment has ticked up or down.

In a recent study we measure the labour market performance in Canada’s 10 provinces and the 50 U.S. states from 2014 to 2016. The study creates an overall index score (from 0 to 100) for each jurisdiction based on five indicators including job-creation, unemployment and worker productivity (measured by the average value of goods and services each worker generated with his or her labour). Higher scoring jurisdictions ranked better.

Overall, Canada has performed poorly relative to the U.S.

In terms of average annual total job-growth, Canada’s national rate (0.7 per cent) was less than half the U.S. rate (1.6 per cent). Canada also had a higher average unemployment rate (5.9 per cent versus 5.4 per cent in the U.S.) and much lower worker productivity (CA$109,190 versus CA$147,397). Nationally, the U.S. labour market has given American workers more opportunity to prosper over the period examined.

When breaking down the results by province and state, the story of Canadian underperformance persists (see chart below). All but two Canadian provinces ranked in the bottom half of the 60 jurisdictions. This includes the traditional economic engines of Canada—Alberta (31st overall with a score of 52.9) and Ontario (44th overall with a score of 47.7).

Quebec, Canada’s second most populous province, ranked 53rd with a score of 41.3. The Atlantic provinces fared even worse, making up four of the five lowest ranked Canadian and U.S. jurisdictions. Newfoundland and Labrador, for example, is tied with West Virginia for last place, each with scores of 30.3.

All of this translates into fewer job opportunities and less prosperity for Canadian workers—and less to celebrate this Labour Day. 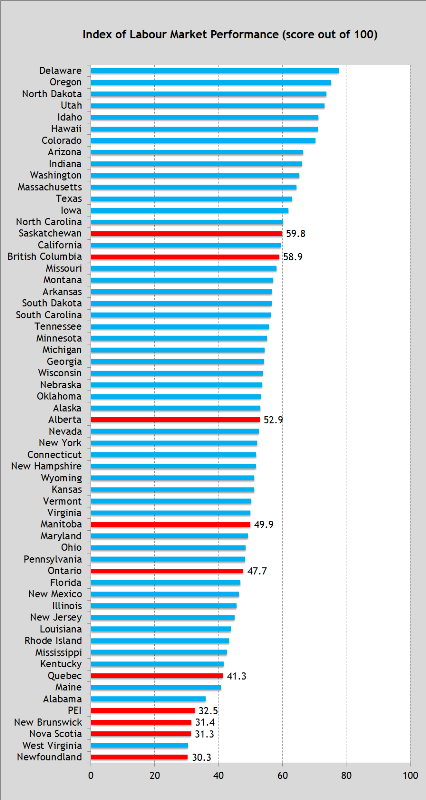