In recent decades, Canada has experienced something many environmentalists thought couldn’t happen—strong economic growth and large reductions in pollution. This is a good news story that deserves telling, and a recent Fraser Institute study does just that.

From 1970 to 2015, Canada’s gross domestic product (GDP) rose by 242 per cent while the population rose by 68 per cent, resulting in heightened demand for goods and services, transportation, housing, etc., which, in turn, required more energy to address the demand.

Subsequently, energy use increased by 21 per cent from 1995 to 2015; motor fuel consumption also intensified during the same period.

In our study we examined the evolution of air quality in Canada from the 1970s onwards, using Environment Canada’s data on ambient concentrations (basically the actual amount in the air) of various conventional air pollutants—primarily, sulphur dioxide, nitrogen dioxide, carbon monoxide and ground-level ozone. The data enabled us to examine individual monitoring stations across Canada over time and to calculate the percentage of stations with readings exceeding the most stringent air quality standards.

As shown in the chart below, the percentage of stations with readings exceeding the air quality standard for sulphur dioxide—a pollutant largely associated with oil and coal combustion—plummeted substantially in Canada. In fact, in the mid-1970s, more than 60 per cent of stations across the country recorded concentrations exceeding the air quality standards, but this number fell to only three per cent in 2015. 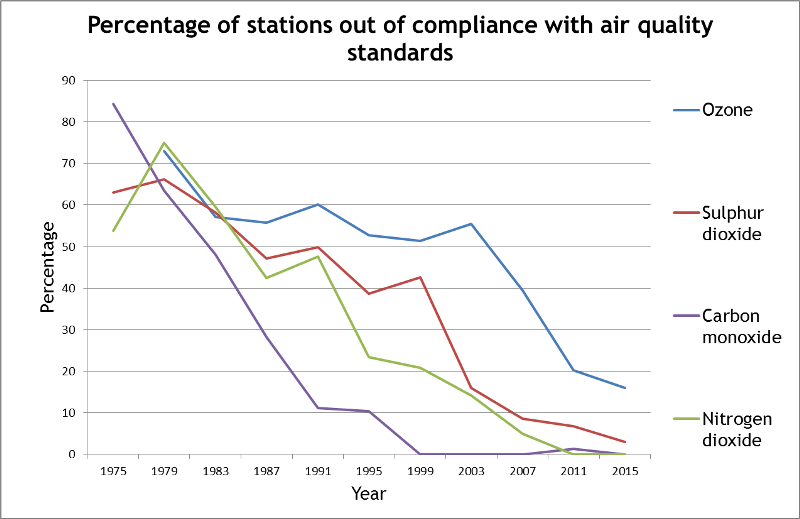 Concentrations of ground-level ozone have also decreased. In the late 1970s—more than 70 per cent of monitoring stations across Canada reported ozone concentrations above the air quality standard; this number fell to 16 per cent during the most recent interval.

Simply put, the evidence shows that air quality has improved dramatically in Canada despite significant growth in GDP, population, energy use and motor fuel consumption. While this does not prove that economic growth is always good for the environment, it certainly refutes the idea that it’s always bad. It also undermines the common assumption that we should cut energy consumption for the benefit of the environment—we have seen that energy use and air quality can grow together.

And finally, when giving advice to developing countries that face both poverty and high pollution levels, we need not wonder if they can only address one or the other.