The federal government has gone to great lengths to highlight that its fiscal policies will lead to significant improvements in the growth prospects for the Canadian economy.

For example, when Federal Finance Minister Bill Morneau delivered his government’s first budget back in March, he boldly stated, “What the Canadian middle class needs most is strong economic growth... [this budget] is an essential step in a sustained, strategic effort to restore prosperity.”

He then doubled down in yesterday’s Fall Economic Statement, mentioning economic growth 27 times and noting “We will usher in a more prosperous, inclusive and sustainable economic future for all Canadians.”

Good rhetoric to be sure, but the government’s own forecasts show its policies aren’t having the desired result. 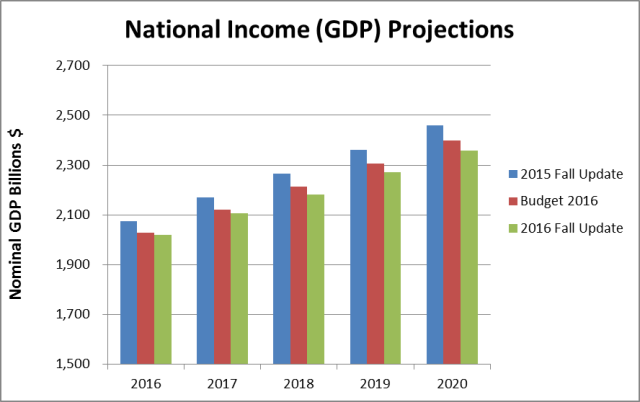 As the chart above shows, the decline in growth rates will lead to a material reduction in expected national income (GDP) in each of the next five years. Over the past year, for example, expected GDP for 2016 has dropped by $56 billion or $1,548 per Canadian. Add up the reduced GDP expected over the next five years and the result is a staggering $396 billion—or nearly $11,000 per Canadian.

Minister Morneau likes to talk about restoring prosperity and economic growth but the government’s own projections are showing the opposite is actually occurring.