Canadians can soon share their views on electoral reform with Ottawa

Sometime soon, Canadians will receive postcards encouraging them to visit a website and answer questions about their “democratic values.” According to a government official, the mail-out is an attempt to understand what values Canadians want represented in their democracy. In addition, the mail-out is intended to increase awareness and build legitimacy for electoral reform.

Details of this initiative remain scarce and it’s unknown what questions will be posed. However, based on a recent Fraser Institute book—Counting Votes: Essays on Electoral Reform—there are some issues Canadians should consider when thinking through their responses and their positions on electoral reform.

In the book, a number of authors examine different voting systems without pre-judging any one system over another.

For example, noted scholar John Pepall offers a sober examination of Canada’s current system, known as First-Past-the-Post (FPTP). Pepall argues that changing the current system will likely affect the outcome of future elections and, in the end, lead to more minority and coalition governments while reducing government accountability.

Some have argued that minority and coalition governments are harmless and create more cooperation and collegiality. However, one of the book’s essays notes that systems of proportional representation (PR) often produce governments with higher levels of government spending and deficits, compared to governments formed via majority/plurality systems.

Moreover, in order to form governing coalitions, larger parties must bargain with smaller parties, often giving into smaller party policy preferences. This can lead to smaller, or even fringe parties, having a disproportionate amount of power.

Which brings us back to Canada. Prime Minister Trudeau, who promised to reform the electoral system during his victorious election campaign, has previously favoured an Alternative Vote (or Ranked Ballots) system.

The book examined poll data from federal elections between 1997 and 2015 to see if the outcome would be different in an AV system than under FPTP. It found that the Liberals were the only party to benefit every election under AV electoral rules, although the NDP experienced large gains under AV in more recent elections. In addition, the book also finds that over the last 23 years, an AV system could have changed the outcomes of the 2004, 2006 and 2011 elections. For example, had AV been in place for the 2006 election, the estimated result would have been a Liberal minority instead of the Conservative minority that occurred under FPTP.

In December, a parliamentary committee on electoral reform will deliver a report, with recommendations on how to change Canada’s electoral system. While the government’s five guiding principles (see table below) on electoral reform are laudable, it places no value on the ability of Canadians to change the party in power.

A central tenet of a functioning democracy is that other political parties have a realistic chance at changing the current regime. An AV system, the prime minister’s seeming preference, fails to address any of the five values the government seeks to address in its electoral reform initiative, and in fact, it would create a new problem: our elections would be less competitive.

This raises questions about the role the public should have in the electoral reform process. Patrice Dutil, professor of politics and public administration at Ryerson University, argues that based on constitutional convention and several precedents, a referendum should be held on electoral reform.

There’s no perfect electoral system. Each system has its own benefits and drawbacks. This is important for Canadians to recognize when they think through which system fits in line with their values. 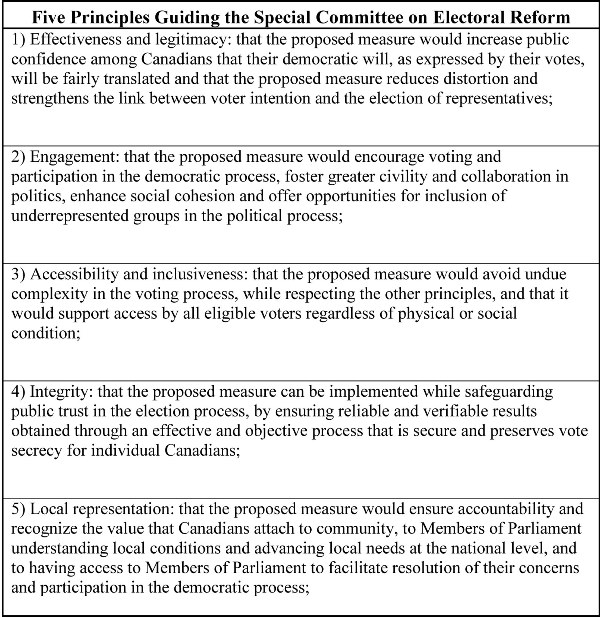