Charters schools: outside the school board behemoth

A recent article in the National Post raised the specter of colossal school boards in Canada, particularly in big cities such as Toronto and Vancouver, and the bloated bureaucracies that consume taxpayer money with seemingly little benefit to students.

The article noted a recent Fraser Institute study on charter schools, which exist in Alberta and are prevalent in the United States, and typically operate outside the centralized school board model.

However, in contrast to the growth observed in the U.S., Alberta remains the only province that permits the establishment and operation of charter schools in Canada. In 1999/00, total enrolment in charter schools in Alberta was 2,073. This figure grew steadily every year, except for a small decline in 2011/12, reaching 8,418 in 2012/13 (see chart below). 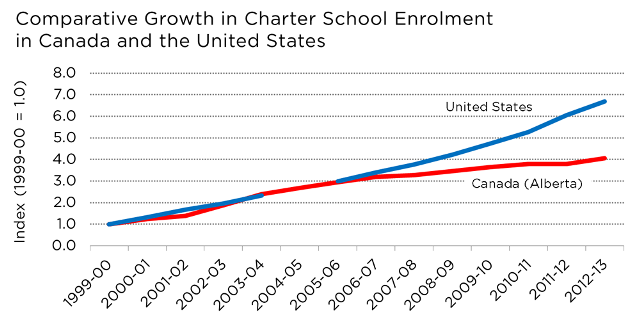 It is time to consider alternatives to bloated bureaucratic structures in the delivery of education. Perhaps the charter school model—or, even better, an updated twenty-first century version of schools that are funded for being accountable to their chartered mandates—deserves more attention.