Chrétien Consensus begins in Saskatchewan under the NDP

This is the first of several blog posts based on the recently released book the End of the Chrétien Consensus?, which chronicles the emergence and success of the policies of this era as well as the move away from these policies over the last decade or so.

The Chrétien Consensus was an implicit agreement that ultimately spread across the country and transcended political party regarding the soundness of balanced budgets, declining government debt, smaller and smarter government spending, and competitive taxes. It emerged in the early 1990s and lasted through to roughly the mid-2000s. And though it’s named after its most notable advocate, former Prime Minister Jean Chrétien, it actually started in Saskatchewan under NDP Premier Roy Romanow.

When Romanow’s government took office in 1991, the provincial deficit topped $1.5 billion with net debt projected to exceed $10 billion the following year. Consequently, almost one-in-four dollars collected by the government was being used to pay interest on the government’s debt.

The mounting crisis and increasing difficulty Saskatchewan was having refinancing existing debt meant reform was inevitable. The Romanow government’s first budget cut spending by $523 million—or more than 10 per cent. All told, the provincial government reduced spending in each fiscal year starting in 1992-93 through to 1996-97. The total reduction in program spending amounted to 14.4 per cent between 1991-92 and 1996-97. Specifically, program spending dropped from a high of $5.2 billion in 1991-92 to $4.4 billion in 1996-97 (see chart below). To reiterate, the Saskatchewan NDP cut program spending—not slowed its growth, but cut actual spending—by 14.4 per cent to purposefully move towards a balanced budget. 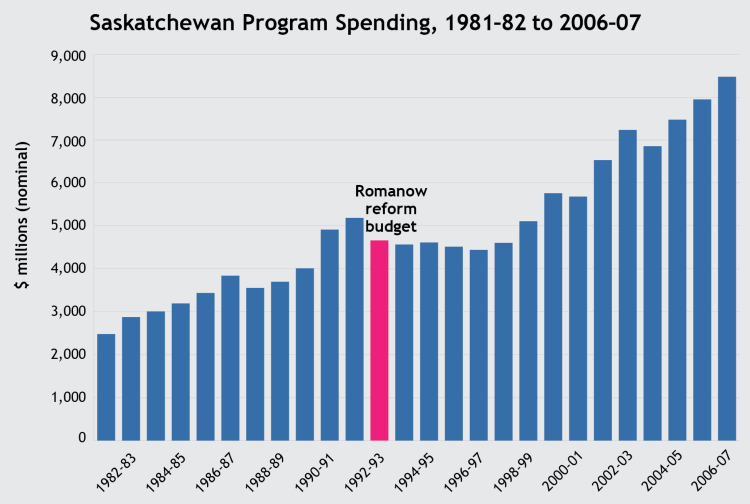 However, during this period the provincial government raised both personal and corporate income tax rates and increased the corporate capital tax, which was a particularly damaging tax since it raised the direct cost of investing in and developing a business in the province. A number of other taxes, including the sales tax, were also increased. While the rate increases brought in more revenue for the government in the short term, they also had the negative effect of making the province less competitive and increasing the cost of capital investment, both of which had longer-term effects for the province.

Nevertheless, thanks to the decisive actions taken in the first two budgets, Saskatchewan balanced its budget by 1994-95, two years ahead of schedule. As depicted in the chart below, the combination of deliberate spending reform and reductions, coupled with tax increases, saw the province begin a string of consistent budget surpluses. 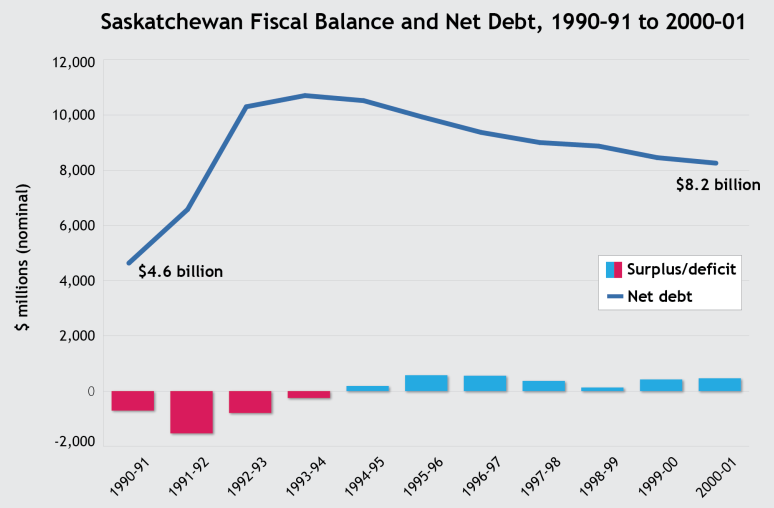 The consistent surpluses and accordant reduction in debt also established a more certain business and investment environment, a key aspect of the Chrétien Consensus and one that’s again often ignored.

The presence of deficits, particularly when there’s no clear path to a balanced budget, introduces uncertainty into the business and investment environment, raising the spectre of future tax increases. That uncertainty has clear, adverse effects on the willingness of businesses and entrepreneurs to build existing businesses or start new ones, which negatively affects the economy. Saskatchewan improved its business environment by creating a more stable and certain environment through balanced budgets.

In summary, this combination of policies—namely balanced budgets, falling provincial debt, lower and more prioritized spending, and competitive taxes—or what we have coined as the Chrétien Consensus, ushered in a period of strong economic growth, increasing levels of employment and marked increases in business investment in Saskatchewan. And perhaps more importantly for the country, started a larger process of reform in Canada.