The Council of Canadians has published a report that is sharply critical of the proposed Energy East Pipeline Project. The report looks at past data from TransCanada and projects forward an estimate that the probability of a major rupture is 15 per cent per year.

This is troubling because surely, the Energy East pipeline project should be the biggest “no-brainer” pipeline of all those proposed across Canada. What could possibly make more sense than to move oil that is presently at a surplus in Western Canada to be refined into motor fuels for Eastern Canada, rather than have Eastern Canada import oil from countries like Venezuela, or members of OPEC, sending Canadian dollars to enrich tyrannical regimes around the world?

There are two primary errors in the Council’s report—one of commission, and one of omission. Let’s take a look a commission first. To derive their scary sounding 15 per cent figure, the Council used the eight TransCanada operated pipeline ruptures, as defined by the National Energy Board (NEB), from 2009 to 2015. Table 1 (below) provides a closer look at the eight ruptures used in their calculations. 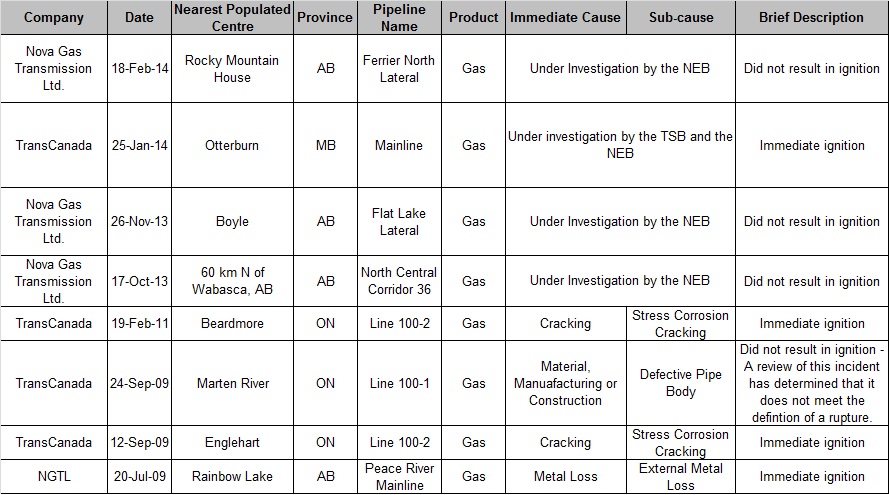 It turns out that all eight pipeline ruptures were for natural gas, not crude oil which Energy East would be transporting. The risks, hazards, and consequences of natural gas vs. oil pipelines are quite different, and incidents with one should not be used to estimate the risk of the other.

But before moving onto a better to gauge of oil pipeline safety, let’s continue with the closer look at the eight ruptures used to assess the potential safety of Energy East. Four of the eight ruptures the Council included in their analysis “did not result in ignition” of the product according to the NEB. Only one rupture occurred in the TransCanada Mainline, which is the pipeline that would be converted to carry oil. And one of the ruptures included in the calculation wasn’t even a rupture according to the NEB, which said that “[a] review of this incident has determined that it does not meet the definition of a rupture.” *

These are hardly what should be considered “catastrophic” ruptures. In fact, none of the TransCanada ruptures as recorded by the NEB have ever involved crude oil; the product has always been gas.

A better way to gauge the potential safety of Energy East begins with a more comprehensive dataset on pipeline accidents and incidents from the Transportation Safety Board (TSB). This dataset provides some interesting insights into the safety records of pipelines in general, as well as for TransCanada. For example, only about 16 per cent of TransCanada’s accidents and incidents occur in line pipe, with the rest happening in pumping stations and transfer facilities where spills can be contained and are much less likely to impact the environment. In fact, only one TransCanada accident or incident has led to environmental damage since January 2004.

We can also use data from the TSB and the U.S. Pipeline and Hazardous Materials Safety Administration (PHMSA) to assess TransCanada’s performance in the operation of an oil pipeline, specifically the 4,247-kilometre Keystone pipeline system, which has been in operation since 2010. In total, there have been 21 instances where some oil has been released in the operation of the Keystone pipeline since 2010. While this may sound large the size of the spills need to be considered.

Since 2010, the Canadian portion of the Keystone pipeline has spilt a total of 2.85 m3 (2,850 litres) or just under 18 barrels of oil. According to the TSB, none of these releases resulted in environmental damage, property damage, fires or explosions.

In the U.S., roughly 429 barrels or 68 m3 (68,000 litres) have been released, with 400 barrels coming from one incident in 2011. None of the U.S. releases resulted in any fatalities, injuries or explosions; one resulted in an ignition; and some environmental remediation was required for the large 2011 spill. That being said, 99.97 per cent of oil spilt by the Keystone pipeline in the U.S. since 2010 was recovered.

The actual record of oil transportation by pipeline presents a drastically different situation than the 30 million litres that the Council of Canadians says could be released in a worst case scenario. Indeed, in the broader TSB data set, which goes back to 2004, the largest release from a pipeline carrying petroleum crude oil was 1,260 m3 or 1.26 million litres and if you use the NEB dataset of ruptures, which goes back to 1992 then the largest release from an oil pipeline was 4,000 m3 or 4 million litres. Both numbers are a long way from 30 million.

While the rhetoric of the Council’s report may sound frightening, the reality of pipeline transport is far different.

* Upon being informed that data we cited from the NEB was in conflict with data from TSB, we contacted NEB for clarification. Indeed, the incident in question was a rupture, and the NEB's data was incorrect in that regard. They will correct their data to align with that of the TSB. We regret any confusion.