Canada’s Finance Ministers will meet next week to discuss options for raising mandatory contributions to the Canada Pension Plan (CPP) to provide increased benefits in retirement. However, the ongoing debate about expanding the CPP has been a distraction from where the real problem lies in Canada’s retirement income system.

There’s a small pocket of largely overlooked seniors who, because of their low income, are financially vulnerable in retirement. Unfortunately, expanding the CPP won’t help them.

Statistics Canada’s “low income cut-off” is not an official measure of poverty but does indicate whether someone is likely to experience difficult financial circumstances. By this measure, single seniors living alone (widows or divorcees, for example) are much more likely to be in low income than other seniors. 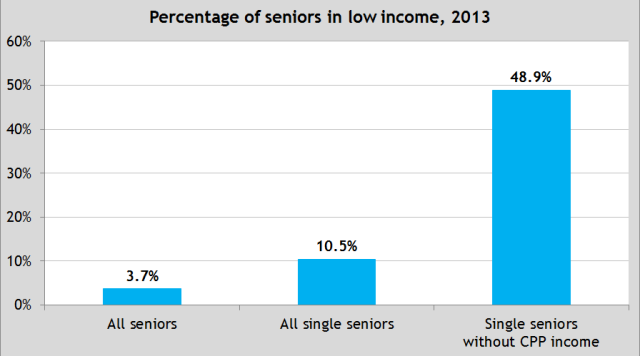 There’s a false claim that expanding the CPP would help financially vulnerable seniors. It will not, partly because many low-income single seniors have not worked outside the home and thus have not earned any labour income—a key determinant of CPP retirement benefits. Those with no work history, and thus no contributions to the CPP, will receive no additional retirement benefits from an expanded CPP.

Even for low-income single seniors with work histories and sufficient contributions to the CPP, expanding the CPP may provide little or no net increase in their retirement income. That’s because a higher CPP benefit could simply result in a reduction in federal (and provincial) government benefits targeted at low-income seniors, such as the Guaranteed Income Supplement.

Put simply, expanding the CPP will largely fail to help Canadian retirees most in need of assistance. Expending further political energy on debating CPP is a distraction from how to best help financially vulnerable seniors.