Ontario’s upcoming provincial budget will likely include a significant increase in government spending with an eye on the spring election. Liberal Finance Minister Charles Sousa has already indicated that the pre-election budget will now feature a return to operating deficits, which could be as much as $8 billion.

Economic weakness has characterized Ontario’s economy for much of the last decade, and the recent upturn in economic activity in 2017 should have helped Ontario climb out of its long string of operating deficits—nine since 2008-09. Another large deficit will simply add to the chronic long-term economic and fiscal problems facing the province; problems which can be described simply as rising debt and economic decline.

Ontario has faced a long-term economic decline rooted in falling rates of business investment and the resulting slowdown in economic growth and productivity. The first chart below plots the province’s annual growth rates of real non-residential structures, machinery and equipment from 1961 to 2016, and includes a trend line. 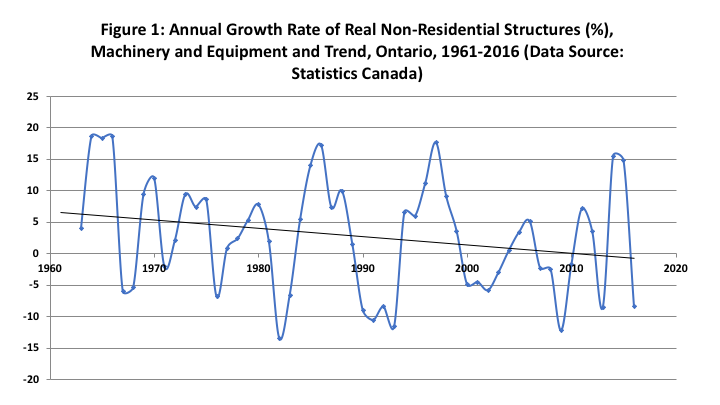 While there has been a slight resurgence since 2010, the growth rates for vital productivity-enhancing investment still lag behind rates from the 1960s through to the 1980s. In the ’60s, the average annual growth rate was nearly 8 per cent, dropped to 4.5 per cent during the ’80s, and during the 2010s has averaged 4 per cent—but after a negative growth performance that marked the 2000s.

The second chart shows what declining business investment eventually means—declining growth rates in the standard of living (as measured by per capita income). In the 1960s, real per capita GDP in Ontario grew at an annual average rate of nearly 4 per cent, whereas by the 1980s it was down to 2.7 per cent. And in the 1990s, fell to below 1 per cent and averaged nearly 0 per cent in the 2000s. 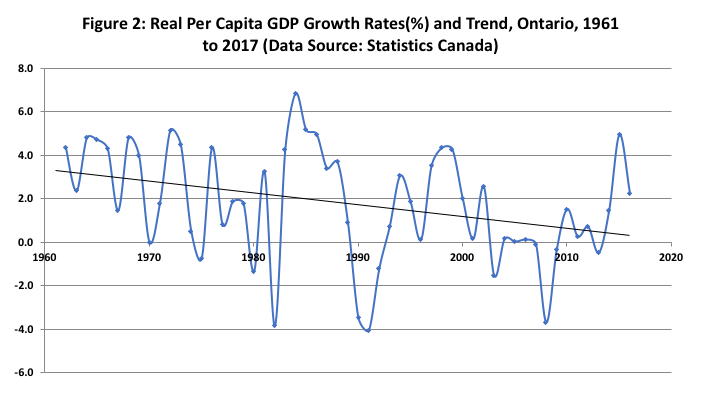 The 2010s have seen a slight rebound to 1.5 per cent average annual growth, but that remains a far cry from decades past. At 4 per cent annual growth, incomes can be expected to double in about two decades whereas at 1.5 per cent it would take nearly 50 years. Ontario has also performed worse than many other Canadian provinces, particularly since 1990, and as a result has gone from having one of the highest per capita GDPs in the country to middle of the pack.

Poor fiscal management, leading to chronic deficits and rising public debt, has accompanied Ontario’s weak long-term economic performance. Since 1961, Ontario has run 41 deficits—a deficit approximately 70 per cent of the time—resulting in accumulated deficits of $188 billion and a net public debt originally estimated at $312 billion in 2017-18 but which may climb after next week’s budget. 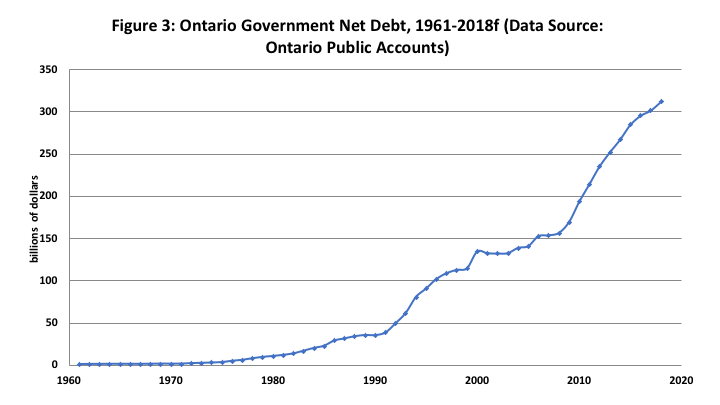 The economic and fiscal challenges facing 21st century Ontario are serious and complex. They include declining growth rates of business investment with implications for the growth of long-term productivity. Declining rates of per capita GDP with long-term implications for Ontario’s standard of living. And mounting debt, which currently requires nearly $12 billion annually in debt service costs (paid for by taxpayers, of course) and takes resources away from other important public services such as health and education.

Moreover, Ontario’s debt will rise independently of any operating deficits given the planned increases in capital spending. Add to this mix the potential for a recession, uncertain export markets due to the NAFTA re-negotiation, and the upward movement of interest rates, and you have a set of forces poised to harm the Ontarians across the province.