Manitoba’s newly-elected government faces some important fiscal challenges. Despite a provincial economy that has been performing relatively well given its diversified economic base, there has developed a persistent gap between revenues and expenditures as evidence from the Federal Fiscal Reference Tables and Manitoba’s most recent Economic Review and Fiscal Update show.

Between 2011 and 2015, nominal GDP has grown at rates ranging from a high of 6.1 per cent in 2012 to a low of 3.1 per cent in 2015. While economic growth over the last couple of years has slowed relative to 2011 or 2012, the fact remains that Manitoba’s economy has been quite stable with enviable unemployment rates that have been consistently below the national average. Even 2009 saw Manitoba relatively mildly affected by the great recession with an unemployment rate of 5.2 percent compared to Canada’s 8.3 per cent.

Yet, despite this relatively robust economy, Manitoba had been running deficits since 2009 and based on the 2016 Economic Review and Fiscal Update presented in March is projected to run deficits in 2015-16 and 2016-17 (see chart below). True, Manitoba has been afflicted with spending associated with flooding disasters most recently in 2011, but nevertheless it’s a consistent rather than a one-shot pattern of deficits. 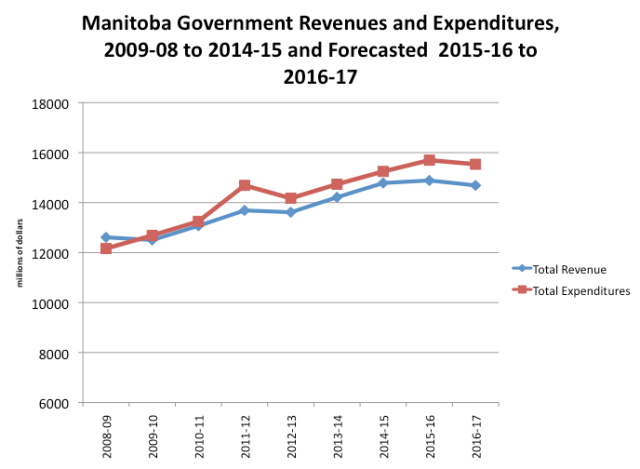 While Manitoba’s fiscal situation is middle-ranked compared to the rest of the provinces, it’s disconcerting that even a province experiencing a relatively good and stable economic performance nevertheless seems to be having difficulty balancing its budget. The new government has a bit of a mess to clean up and it will be interesting to see what plans are laid out in the first budget.