There’s a lot of talk right now in the U.S. presidential race about the wealthy not paying their “fair share” of taxes. There are similar concerns in Canada. Although the term “fair share” is rarely defined, clearly some Canadians believe top-earners are getting away without paying much tax.

Let’s take a look at the Canadian data. The results may surprise you.

If we just look at personal income taxes, the top 10 per cent of earners—the country’s high-skilled, educated workers including entrepreneurs, business professionals, engineers and lawyers—earned 35 per cent of Canada’s total income yet paid 54 per cent of federal and provincial income taxes. That’s according to Statistics Canada data.

But that of course is just income taxes. Canadians also pay payroll taxes, sales taxes, property taxes, fuel taxes, profit taxes, “sin” taxes on liquor and tobacco, and much more. When we account for all these taxes, the top 10 per cent earns 32 per cent of all income in Canada but pays 40 per cent of all taxes. Again, the share of Canada’s total tax burden borne by top-earners is significantly higher than their share of Canada’s total income.

Meanwhile, middle- and lower-income earners pay proportionately less. In fact, the bottom half of earners in Canada earn 22 per cent of all income yet pay only 15 per cent of all taxes.

The imbalance between lower and higher income groups, in terms of the percentage of income earned and total taxes paid, challenges the view that upper-income earners don’t pay their “fair share” of taxes. 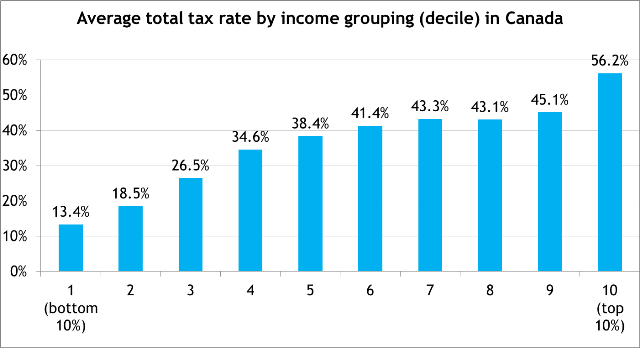 Despite concerns, Canada’s top earners already shoulder much of the country’s tax burden.