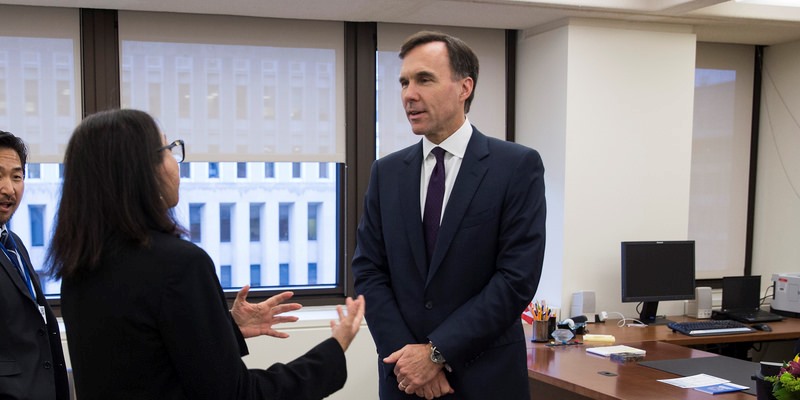 In this year’s federal budget, Finance Minister Bill Morneau confirmed the government is more than happy to continue down a risky path of deficit-financed spending. Once again, the government opted to throw money in every direction rather than demonstrate restraint and manage Canada’s finances more responsibly by proactively moving towards a balanced budget.

Throughout the 464-page Budget 2019 document, the government included several “goodies” including a new Canada Training Benefit. And it set the stage for national pharmacare.

Of course, all of this spending comes at a cost.

Program spending is set to grow again by 1.8 per cent this year. This increase means program spending has climbed by $52.9 billion since the government’s first year in office and there are no signs this will slow down any time soon. In fact, Budget 2019 indicates that program spending is expected to increase by a further 12.1 per cent (or $39.7 billion) by 2023/24.

It didn’t have to be this way.

Despite actual revenues from the last four years closely matching projections from Budget 2015, the government has increased spending by more than $66.0 billion from the previous government’s 2015/16 projections. Five consecutive projected surpluses in Budget 2015 (totalling $13.1 billion) under the former government have turned into $75.5 billion in cumulative deficits, solely to finance this government’s spending. Even a small amount of fiscal responsibility could have prevented this. To make matter worse, Canadians have been told repeatedly these spending increases would improve the economy’s performance.

But Canada’s economy is beginning to falter and investment capital is fleeing the country. Growth in economic output slowed to a mere 0.1 per cent in the last quarter of 2018. Since the government first took office, foreign direct investment in Canada has declined by 8.4 per cent and non-residential business investment has shrunk by 5.5 per cent.

And remember when the government promised to balance the budget this year?

On Tuesday, Minister Morneau quashed whatever slim chance remained of that happening. Instead, the government chose to run a $19.8 billion deficit in 2019/20 with no plan to return to balanced budgets in the near future. Cumulative deficits are expected to equal $76.2 billion over the next five years and federal debt is projected to reach $761.7 billion (or nearly 30 per cent of our economy) by 2023/24.

And yet, Canada already has a successful blueprint to follow. After three decades plus of deficits, Jean Chretien’s Liberal government reduced program spending by nearly 10 per cent from 1994/95 to 1996/97 and balanced the budget one year later.

The current government could have delivered a balanced budget by 2020/21 by modestly reducing program spending from 2018/19 levels by even 0.2 per cent (excluding the risk adjustment) over the next two years. The only thing standing in the way of that in this budget was the government’s unwillingness to do so.

Sooner or later, Ottawa will have to make hard choices about federal finances. With this budget, this federal government chose to continue playing fast and loose with our finances and spending money on whatever they could while waiting for someone else to deal with the fallout. And the longer they wait, the worse it will get.