Federal deficits in Canada: another view

The current election campaign has seen a lot of attention focused on balancing the federal budget and the size of the federal deficit. Some of the remarks have shown a surprising lack of familiarity with trends in the federal finances over time. It helps to place the current debate in some historical perspective when it comes to understanding the deficit and its evolution, which can be done with the help of the Federal Fiscal Reference Tables.

As Figure 1 shows, Canada’s federal government has run a lot of deficits since 1966. 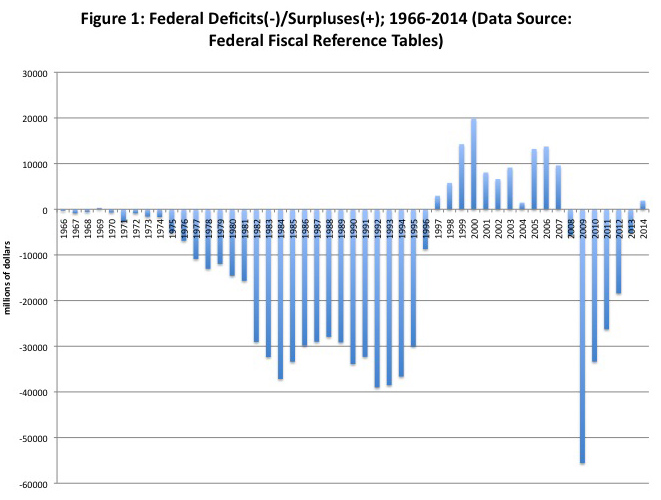 Indeed, in the half-century this data covers, there were 36 deficits and only 13 surpluses. In other words, the federal government has run a deficit nearly 75 per cent of the time since 1966. The biggest deficit during this period was $55.6 billion in fiscal year 2009/10 while the largest surplus was $19.9 billion in 2000/01.

Canada’s federal government ran 27 consecutive deficits from the period 1970 to 1996 accumulating $553 billion in total deficits. In contrast, the string of consecutive surpluses that followed from 1997 to 2007 only totalled $105 billion.

Of course, judging the severity of a deficit by its absolute size alone can be misleading. The size of the deficit relative to GDP (the value of all goods and services produced over a specific time period) provides a better indicator of the severity of the federal deficit situation. As Figure 2 illustrates, taken as a share of GDP, our most recent string of deficits pales in comparison to what occurred between 1970 and 1996. 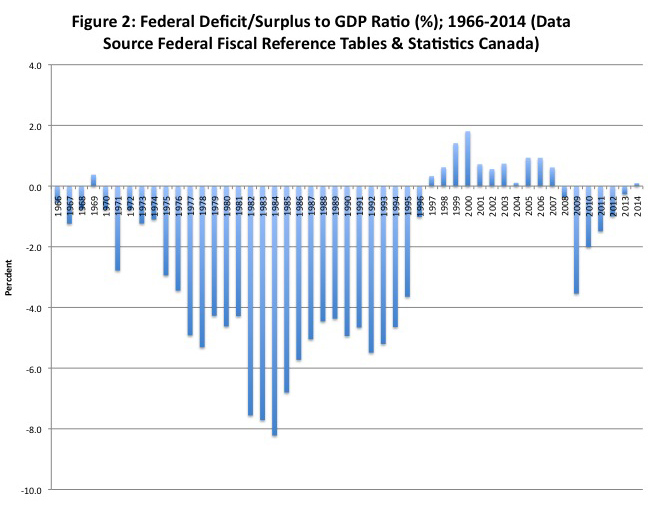 At its worst, from 1982 to 1985, the deficit-to-GDP ratio exceeded six per cent, and in 1984 actually stood at 8.2 per cent of GDP—its highest value for the period of this chart. By way of comparison, the 2009 federal deficit—the largest deficit in dollar amount since 1966—only accounted for 3.5 per cent of GDP.

Of course, one might be tempted to conclude from all this that deficits are simply a normal state of affairs given their frequency. That would be a mistake. In the absence of extenuating circumstances such as a major recession, which can impact the ability of government to raise revenues or require some stimulus, a deficit is the product of poor fiscal management. The combination of successive deficits during the 1970s and 1980s, combined with the high interest rates of the 1980s, led to mounting federal debt and the fiscal crisis of the 1990s.

This should be something to avoid.