Innovation, invention and the free market in the creative arts

When people think about innovation and invention as it concerns the arts (literature, painting, music, film etc.), their minds perhaps turn first to the mystery of artistic creation itself. From where did Shakespeare and Shelley draw their inspiration for linguistic invention? How did Monteverdi learn to combine innovative musical arrangements with operatic drama? How did film directors like Hitchcock, Spielberg and Bigelow learn and adapt their craft to create works of great originality? There are no easy answers to these questions.

Imagine picking up a manuscript page for a short poem written in 1750. It might take you the better part of an afternoon to read it through. 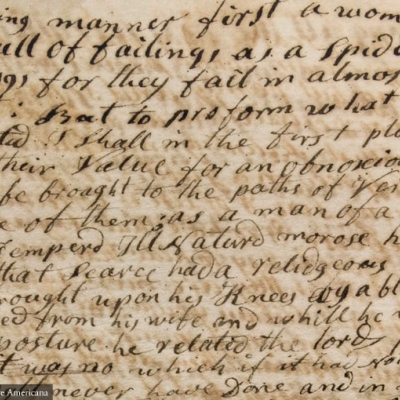 There are many things that account for this difficulty: the texts were handwritten, often (to us) in illegible script, the paper quality was rather poor, the pens were made of quills, the ink blobbed into puddles and mini rivers, obscuring parts of words. In many manuscripts there are drawings—flowers, faces, little boats. Some speculate that writers were just bored, that’s why they doodled. That could be, but another reason is a practical one: during pauses in composition, one had to keep the ink flowing in one’s pen, or it would dry up and be unable to write. It’s like hitting your space bar or the control key to prevent your computer screen from going to sleep.

In most older manuscripts the text is crammed so closely together that the tails of some letters drift clean over the tops of others. In some the page is spun 180 degrees and additional lines of are written upside down in between existing text. An initial glance at many early documents would lead one to believe that you are reading some ancient undeciphered script. And it could simply be a draft of an English poem written a mere 200 years ago.

The paper, pens and ink were poor because key innovations had yet to be discovered and brought to market. The text was crammed together to make best use of scarce resources. Pens, ink and especially paper, were very expensive. By contrast, today one can buy any number of writing instruments, any colour of ink, and any kind of paper, for the price of a pizza. If you are willing to make the investment, you can graduate to a computer and word-processing software, simplifying your writing still more.

I am not suggesting that innovations and inventions improve artistic creativity (though they may), but I would argue that technological innovations assist with creative production. That is, certain technologies reduce the obstacles to creation, enhancing the artist’s ability to bring creative vision into being more efficiently.

The point becomes all the more pronounced when we consider other artistic media such as music and film. The development of electronic synthesizers, cameras, mixers and editing software has dramatically enhanced an artist’s ability to create art with less time and money.

In some important ways, free markets (and the institutions that underpin most free markets) can accelerate these innovations in the arts much more efficiently than any form of centralized state funding of the arts. In further posts I will explore this relationship, attempting to highlight how the market, often depicted as the enemy of the creative arts, is the greatest stimulant to rich creative production.