The previous two posts based on Philip Cross’ recent study Ontario: No Longer a Place to Prosper focused on economic growth and GDP, and the province’s poor performance in growing incomes and creating private-sector jobs. This final blog post explains one of the core reasons for the province’s poor performance: a lack of private-sector business investment.

Business investment, which excludes housing, is no longer the driving force of capital formation in Ontario. In its place, investment by the public sector in Ontario has nearly doubled, from $16 billion in 2002 to $29 billion in 2014 (see figure below). This increase was led by utilities, which more than doubled to $8.7 billion, and public administration, which nearly doubled to $13.7 billion. Education and health care both saw increases of over 50 per cent to about $3.4 billion. The total size of public-sector investment undoubtedly is more than $29 billion, but the large government investments in the transportation sector (such as subway extensions in Toronto and train systems for commuters in Toronto and Ottawa) cannot be separated from Statistics Canada’s data on investment by the transportation industry. 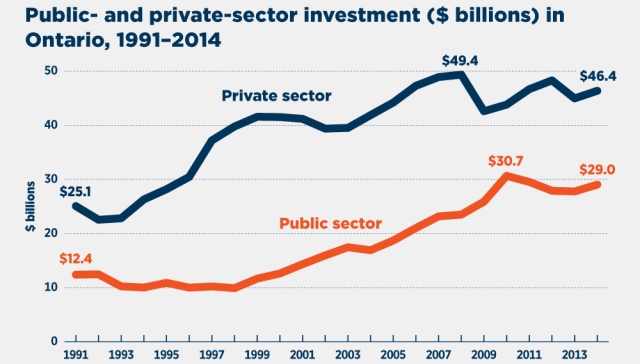 Meanwhile, private-sector investment has risen by a total of only 17.8 per cent since 2002 to reach $46.4 billion in 2014. Business investment peaked in 2008, and has not yet regained this level five years later. As just noted, this overstates private-sector investment since transportation investment by governments cannot be disentangled. The surge in public-sector infrastructure projects helped lift investment by both utilities and transportation above any industry in Ontario in recent years, leapfrogging the traditional bastions of manufacturing and finance where investment has languished (see figure below). 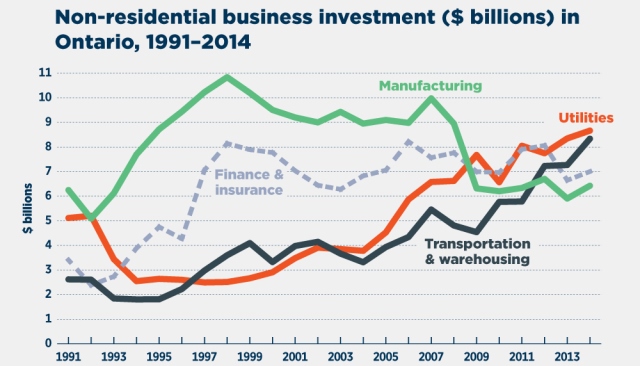 The lack of business investment in Ontario threatens its future prosperity. Some high-profile decisions to stop investment in Ontario include the decision by Cliffs Natural Resources to write-off hundreds of millions related to its “Ring of Fire” Bloom Lake mining project. The brief surge in investment in mining was the main reason for the spike in investment in resources after the recession, but the momentum has not been sustained. No new automobile-manufacturing plants have been undertaken in Ontario in over a decade, while General Motors will close a second shift at its Oshawa operations. The weakness in capital spending by automobile manufacturers is the main factor behind slumping investment in manufacturing overall.

Simply put, the reduction in the province’s competitiveness and the increased costs of doing business in the province, both of which are driven by policies in Queen’s Park, have resulted in less private-sector investment, whose affects reach far beyond just investment and influence economic growth, whether incomes are rising, and the state of the province’s labour markets.