Marcus Welby, where are you? The decline and fall of house calls

I recently saw an interesting Tweet from Jay Parkinson, MD, one of America’s new breed of entrepreneurial physicians: “There's a reason why house calls went out of fashion. Grossly inefficient use of very expensive doctor time + extremely limited capability.”

The economist in me took umbrage at that remark, so I replied and we got into a short exchange: 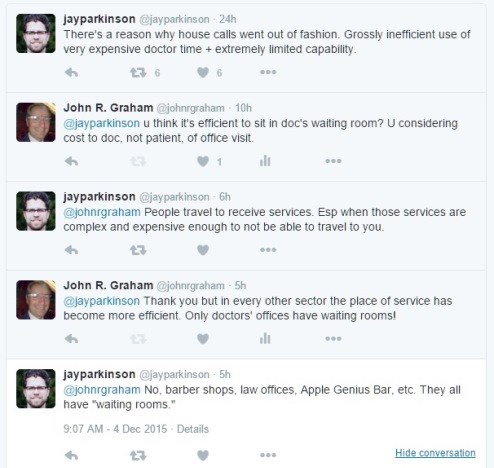 Keith Wagstaff of ABC News covered this very well in his discussion of a study estimating the average American lost $43 in wasted time waiting for a scheduled appointment—more than the amount of the out-of-pocket payment!

Further, the time spent actually consulting the doctor has shrunk to maybe 15 minutes. So, from a patient’s perspective, the ratio of productive time to wasted time is getting worse. House calls used to make up 40 per cent of U.S. doctor visits in the 1940s, before going into decline in the 1960s. They comprise less than one per cent of consultations today (see citation at bottom of post).

In Canada, the decline in house calls appears to have been first noted in 1976, and has continued to decline, despite anecdotes and evidence that an increase in house calls would increase quality of care and decrease costs.

Although Dr. Parkinson insists that we also wait in barbershops and lawyers’ offices, I beg to differ. Like most men, I drop in for a haircut, and can therefore ensure I wait at the least expensive time for me. My wife, who makes appointments, would never tolerate waiting as long for her hairdresser as for her doctor. Nor do lawyers keep clients with scheduled appointments waiting for an hour or more to read old magazines in a “waiting room.” (In other sectors of society, they are called “reception areas.”)

What explains the significant shift in cost of travelling to a consultation from the doctor to the patient?

I would argue the most significant factor is patients’ having lost control of paying doctors. According to the U.S. National Health Expenditure Accounts, private patients (not those enrolled in programs like the military, veterans’ benefits, or workers’ compensation) paid 67 per cent of the aggregate bill for consultations in 1960. By 2014, that had collapsed to 11 per cent. Private insurance paid 50 per cent, and government welfare programs (Medicare, Medicaid per cent, and Children’s Health Insurance Program) covered the balance.

Canada’s National Health Expenditure Database only goes back to 1975, by which time the system had been socialized. Nevertheless, in 1950, only half the Canadian population had even hospitalization insurance. So, it’s likely that almost all Canadian physicians’ income in the mid-20th century was paid directly by patients (easily confirmed by asking your parents or grandparents).

In both countries, patients lost control of payment. In Canada, this was due the Canada Health Act. In the U.S., it was due to the growth of private insurance, Medicare (for seniors) and Medicaid (for low-income Americans. As they lost control of payment, they lost the ability to signal how much they valued their time, and house calls declined. Remarkably, this was over a period when people’s time became more valuable as our incomes increased, and our tolerance for queuing and visiting different vendors shrank. This is one reason for the rise of department stores, supermarkets, and (later) big-box stores.

Remarkably, Dr. Parkinson’s own business, Sherpaa, is a solution to this problem:

“We're doctors and insurance guides, empowered by our first-of-its-kind secure communication and care coordination platform, who diagnose, treat and partner with your employees to get them better fast.”

Sherpaa uses innovations such as mobile technology to deliver faster, better care to clients’ employees. Those clients do not care about the doctors’ time. They care about their employees’ time.