Premier Wynne’s government recently announced a plan to hike Ontario’s minimum wage by 32 per cent, from its current rate of $11.40 to $15 by 2019. We’ve already written that such a large and rapid increase in the minimum wage is likely to have negative economic consequences based on existing evidence. Young and low-skilled Ontarians will be particularly hurt as they lose out on job opportunities.

Most minimum wage workers are youth aged 15 to 24 (60 per cent, in fact), making young Ontarians a group of particular interest when considering the consequences of minimum wage increases. This group of workers tends to be less skilled and less experienced, making them more vulnerable than their older and more experienced colleagues. An employer looking for ways to cut-back on costs in response to a minimum wage increase is more likely to target the less productive, younger workers for reduced hours or may be less willing to take a chance on hiring a teenager.

Indeed, past experience in Ontario shows that as the minimum wage has gone up, the youth employment rate has gone down. 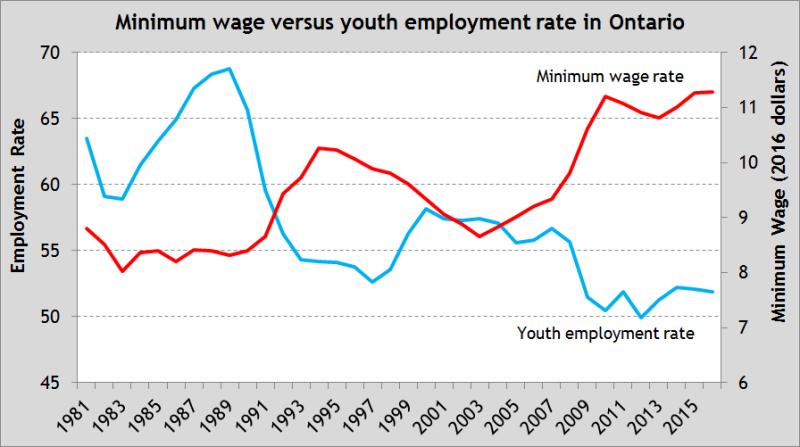 There’s another concern regarding how the proposed minimum wage hike might affect youth. As young Ontarians struggle to find an employer willing to take them on at $15 per hour, many of them may feel discouraged and give up looking for a job altogether. Such an outcome could be captured by looking at the youth labour participation rate—the percentage of youth employed or looking for work. Indeed, the zero-to-one correlation scale for the minimum wage rate and youth participation rate is negative 0.85, suggesting that a higher minimum wage could drive some youth out of the labour market.

Making it harder for young Ontarians to find a job has long-term negative consequences, too. A minimum wage job can provide a young worker the opportunity to gain valuable experience and skills, which helps them command higher pay down the road. Indeed, the evidence shows earning the minimum wage is typically a brief stepping stone to a higher paying job.

Both the preliminary data in Ontario and the existing body of Canadian research suggest young Ontarians will be hurt by the Wynne government’s plan to hike the minimum wage.