Claims that “10 per cent of Canadians” live in poverty understandably sound dire. But those claims about the extent of poverty in Canada often focus on a snapshot in time of Canadians with low incomes. This is problematic and in fact misleading for two important reasons.

First, snapshots in time do not distinguish between those who are in that unfortunate circumstance temporarily versus those who are there persistently. When that critical distinction is made, which our recent study does, we find—thankfully—that for the vast majority of Canadians exposed to living in low income, it’s a temporary experience from which they are able to escape in short order.

The distinction between temporary and persistent low income is important because the appropriate policy responses for helping each group is very different. Policies designed to help a young university student living alone or someone who unexpectedly loses their job and experiences low income temporarily will not be the same as policies designed to help someone with a severe mental or physical disability or someone struggling with a chronic drug or alcohol addiction experiencing persistent low income. 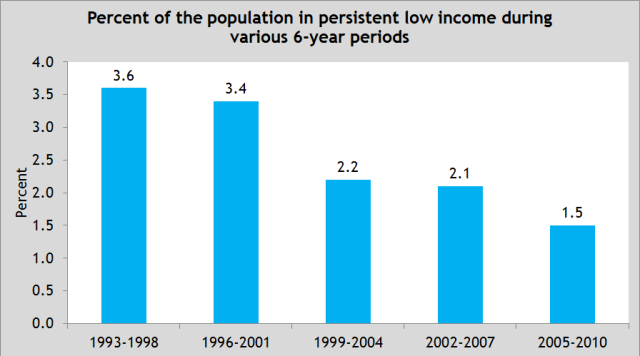 While 1.5 per cent of the population in persistent poverty is still significant, and reducing this share further is a worthwhile policy objective, it is much lower than the 10 per cent “poverty rate” we often hear about. Again, the reason for this difference is the 10 per cent figure includes Canadians both in temporary low income and those stuck there year after year.

Yet both of the percentages noted above do not actually measure the extent of absolute poverty. Canada has no official poverty line, so Statistics Canada’s low income cut-off (LICO) is often used instead to provide some important insights. LICO is not, strictly speaking, a measure of poverty, as in the deprivation of basic needs such as adequate shelter and food. Rather, it’s a measure of low income relative to other members of society.

This is important because using LICO as a measure of poverty actually overstates the extent of poverty in Canada. The advantage of LICO, however, is that Statistics Canada has used it for tracking the movement of people in and out of low income, and this tracking is what allows us to measure the extent Canadians experience persistent low income.

The decline in persistent low income is encouraging but it is still concerning that some continue to get stuck. In order to reduce this further, the next step is to better understand the various root causes of persistent poverty.