Ontario can learn from Michigan’s success

Recently, Ontario Premier Kathleen Wynne and Michigan Governor Rick Snyder (both pictured above) signed a memorandum of understanding stating they would cooperate to promote innovation in the regional auto industry.

It’s noteworthy that the two leaders were on the same page, because in reality, their governments have taken different approaches to economic policy with markedly different results.

On results, consider the numbers. A natural starting point is to look at (inflation-adjusted) GDP growth, a broad measure of economic performance.

In the years following the Great Recession, that all changed. From 2011 to 2014, average annual economic growth in Michigan was actually higher than in Ontario, despite slower population growth. In fact, inflation-adjusted economic growth per person in Michigan averaged 1.7 per cent annually between 2011 and 2014—that’s about double Ontario’s rate of 0.9 per cent.

The graphic below shows that employment grew faster in Michigan’s manufacturing sector than in Ontario’s every year between 2011 and 2014. Our recent study shows Michigan has also outperformed Ontario relative to their respective national economic metrics, suggesting Michigan’s strong economic performance likely shouldn’t be viewed as simply a function of national level forces. 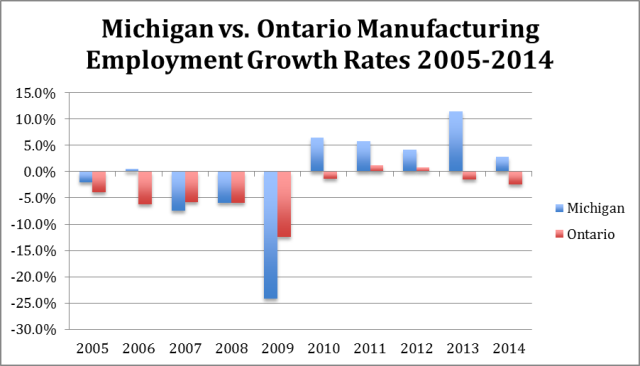 Clearly, the manufacturing sectors and indeed the broader economy in the two jurisdictions went in opposite directions. Michigan’s remarkable economic turnaround happened at the same time as its state government was implementing a series of important economic policy reforms.

These reforms included the reform and reduction of the state’s complex and onerous business tax, the passage of “right to work” legislation, and prudent fiscal management focused on spending restraint.

This final dimension of the reform package produced a string of balanced budgets and helped put the state’s finances on more solid footing. This is the opposite of what’s happened in Ontario, where the province has failed to adequately bring spending in line with revenue and has seen a rapid run-up in government debt.

It’s beyond the scope of this discussion to quantify the contribution of each of these policy reforms to Michigan’s economic turnaround, but it’s nonetheless striking that Michigan’s policy reform era has been characterized by strong economic performance. Certainly, critics who argued the reforms would create significant economic headwinds for the state have not been proven correct.

Given the different approaches to economic policy the two governments have pursued, the recent promise of economic cooperation was noteworthy. Hopefully during their time together, Premier Wynne spoke to Governor Snyder about his government’s economic reform program and considered what lessons it may have for Ontario.