In a recent Toronto Sun op-ed, Ontario’s Energy Minister Bob Chiarelli, trying to defend his government’s power policies in the wake of the latest rate increases, resorted to claims any ratepayer tracking their bills can see for themselves are nonsense.

Mr. Chiarelli contends that, “[w]hile electricity prices—like the prices of all goods and services—are rising with inflation, the good news is that our bills are increasing slower than they are in neighbouring jurisdictions.”

Contrary to Chiarelli’s claims, Ontario electricity prices are rising much faster than inflation and worse than the national electricity costs trend. From January 2005 to November 2015, the all-items consumer price index for Canada increased by 21 per cent, the price of electricity across Canada increased by 42 per cent, while electricity prices in Ontario grew by 66 per cent in this period. Since the passage of Ontario’s Green Energy and Green Economy Act in 2009, consumers there have been particularly hard hit. 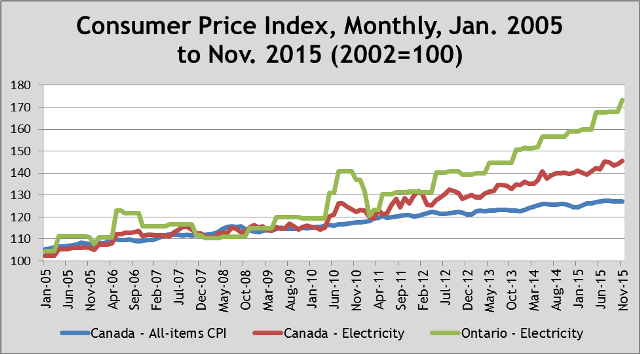 Mr. Chiarelli would have us believe that his government’s conservation subsidy programs fix the problem for consumers. The auditor general correctly pointed out the folly of claiming costly conservation programs help ratepayers in a situation where exports are subsidized, generators are being paid growing amounts to not generate, and demand is dropping.

In her recent report, Ontario’s auditor general documented just how costly electricity has become in the province, partly driven by the province’s heavy investment in renewable energy. Here are some of the findings from the report:

• Ontario’s electricity costs exceed their export value, but exports are expanding rapidly. From 2009 to 2014, Ontario exported 95.1 million megawatt-hours (MWh) of power. It cost $3.1 billion more to produce that power than Ontario wound up receiving in revenue for it.

• Consumers will pay $9.2 billion more for renewables under the current 20-year Feed-In-Tariff contracts than they would have had to under Ontario’s previous program of competitive renewable procurement.

• Ontario’s guaranteed prices in 2014 are approximately double for wind power, and three and a half times for solar power, the current average U.S. costs.

• Converting government-owned coal plants to biomass has been expensive, with the cost of power as high as $1,600/MWh—25 times higher than the average cost at other biomass facilities in Ontario.

Mr. Chiarelli also contends that his government’s electricity policies have been worth it because of the environmental benefits stemming from the province’s transition of coal.

But as University of Guelph economist Ross McKitrick has explained, if Ontario had simply continued with ongoing retrofits to coal plants, all the environmental benefits of the Green Energy Act and the transition to renewables could have been achieved at one-tenth the cost.

Moreover, the auditor general in her report concluded that using non-hydro renewables to reduce electricity-sector carbon emissions costs approximately $257 million for each megatonne of emissions reduced. That’s $257 cost to reduce one tonne of CO2.

To put this cost into perspective, British Columbia’s carbon tax uses a social cost of carbon (an estimate of what the damages of CO2 might be) of $30/t of CO2, making the Ontario cost of reducing emissions using non-hydro renewables 8.5 times more than what other jurisdictions price them at.

Ontario’s energy minister may be trying to downplay the effects of the province’s approach to electricity policy. But in the meantime, Ontarian consumers and businesses are the ones bearing the costs.