Ontario has fallen behind Michigan’s economy 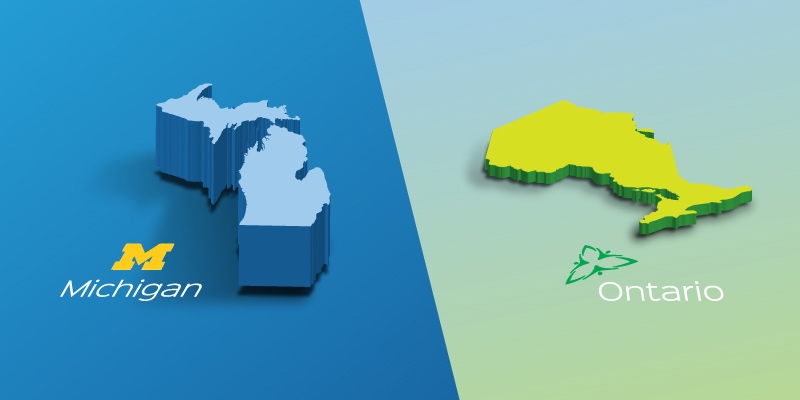 According to a recent study, Ontario has the lowest per-capita GDP and (since 2000) the slowest economic growth rates in the Great Lakes region.

In fact, in terms of inflation-adjusted per-capita GDP growth since 2000, Ontario beat just one U.S. state—Michigan. However, even there the story is more complicated than this indicator suggests because Michigan’s poor economic performance in the 2000s and the 2008-09 recession affect the average for this indicator. But in many subsequent years, the Wolverine State’s economy roared.

In fact, Michigan’s economic success during much of the 2010s was so impressive that it surpassed Ontario’s per-capita annual economic production.

For example, following the 2008-09 recession and subsequent 2010 recovery year (when Michigan made many of the gains from its particularly brutal recession), the state’s economic growth consistently outperformed Ontario’s from 2011 to 2017. During these years, real per-person growth in Michigan outstripped Ontario’s in five years. Ontario beat Michigan in just one year, and in one other (2017) economic growth in the two jurisdictions was nearly identical.

Partly as due to this stronger growth during the 2010s, by 2019 Michigan’s economy was meaningfully larger than Ontario’s on a per-person basis. More specifically, Michigan, although still holding the lowest per-capita GDP of all U.S. states in the Great Lakes region, enjoyed a per-capita GDP 6.4 per cent higher than Ontario’s in 2019.

Of course, it’s important to recognize that Ontario, like Michigan, remains a large and diverse province with significant regional disparities in economic performance. One 2020 study showed that between 2008 and 2019, fully 90 per cent of net job creation in Ontario took place either in the Greater Toronto Area or Ottawa compared to 10 per cent in the rest of the province. This means that although Ontario’s overall economic performance has been comparatively weak, the economic pain has been spread unevenly with cities and towns and rural areas outside the provincial and national capitals generally experiencing worse economic results.

So why has Michigan outperformed Ontario?

This isn’t an easy question to answer since so many different factors influence economic growth. However, Michigan’s economic turnaround occured almost simultaneously with a major policy reform package implemented in the 2010s. The centrepiece of this package included a simplification of the corporate tax structure and significant corporate tax reductions.

Ontario is a wonderful place to live, with economic freedom and prosperity for its residents that greatly exceed the vast majority of the Earth. However, Ontarians should not settle for the province’s weak relative economic performance compared to its neighbours, and should push policymakers promote growth and help Ontario catch up to nearby U.S. states.

The fact that by 2019 Ontario had fallen behind Michigan, the one state over that we have enjoyed a per-capita GDP advantage in recent years, should be a wake-up call. To help boost economic growth in Ontario, policymakers should carefully examine Michigan’s reform experience and consider whether any components of that policy package can help boost Ontario’s growth rate so the province.