Last week, Premier Kathleen Wynne’s government published its budget for the 2017/18 fiscal year. As we warned in a recent study published before the budget was tabled, the Ontario government plans to add billions of dollars to the province’s already very large debt load in each of the next three years.

Many news reports following the budget’s publication focused on the issue of continued debt accumulation in Ontario. Maclean’s, the Canadian Press and many other high-profile media outlets focused on this critically important issue in their reporting on the Ontario budget. This was an encouraging sign that Ontarians recognize that despite the government’s cheerful spin, our highly indebted province is still in bad fiscal shape.

Indeed, a closer look at the numbers shows that the problem isn’t just that Ontario hasn’t stopped the accumulation of new provincial government debt—it hasn’t even slowed it down.

The chart below illustrates this fact by showing past and forecasted future annual changes in the province’s net debt between fiscal years 2014 and 2019. This year, Ontario’s debt is expected to climb by $10 billion, followed by an $11.4 billion increase next year and a $12.6 billion increase the year after that. That works out to an average of $11.3 billion in new debt annually—almost exactly the same as the previous three years when the average annual debt increase was $11.6 billion. 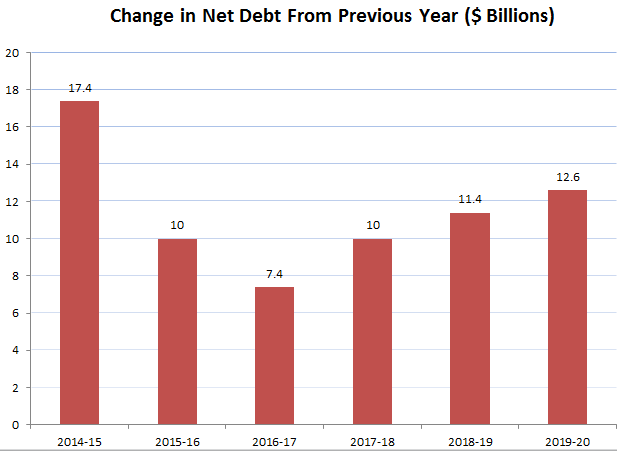 All of this forecasted debt accumulation will contribute to growing interest payments on government debt in the years ahead. In fact, interest on provincial debt is the fastest growing major category of spending in Ontario’s budget. By the end of the government’s current fiscal plan in 2019/20, the provincial government will be paying more than $1 billion per month just to service its debt. These growing debt service payments will make it harder for future governments to balance their budgets, and eat up scarce resources that could otherwise be available for other priorities such as health, education or tax relief.