While the latest economic news for Canada’s resource-based provinces has been grim, Ontario is being presented as a bright patch. Indeed, given the surge in GDP growth announced for January that was lead by manufacturing and recent employment numbers showing that employment growth in the province was among the highest in the country, Ontario seems at first glance to be on the road to once again being Canada’s economic engine.

Despite the optimism, these numbers have to be qualified. For example, with respect to employment, when Ontario’s recent monthly employment generation is annualized, the equivalent of 86,000 jobs are created per year. As the chart below illustrates, when compared to the last couple of years, this is certainly an improvement. However, the annual average employment generation for 2014 to 2016 is only 62,000 jobs—assuming that 2016 continues on its current path.  This is below the rate of job-creation during the immediate post-recession recovery period from 2010 to 2013, which saw an annual average of nearly 98,000 jobs. 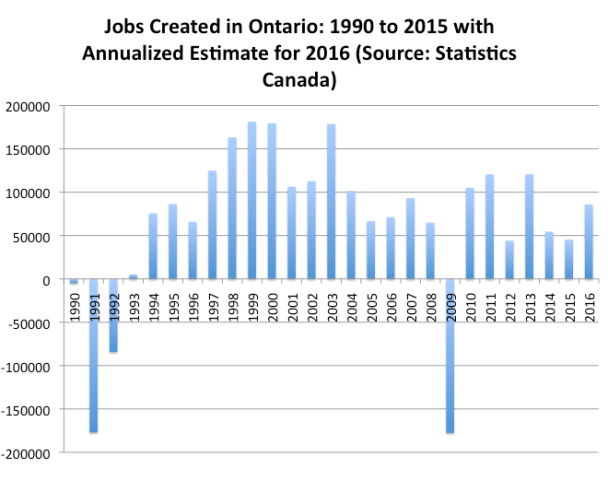 All of this pales when compared to the boom era that stretched from 1996 to 2003 when consumer spending, personal and corporate income tax reductions, U.S. demand and falling interest rates led to average annual job-creation of 139,000 jobs.  By past standards, Ontario’s current rate of job-creation is weak.

As for Ontario’s manufacturing recovery, it’s indeed correct that the value of Ontario exports is up. While this is attributed to a better performance in Ontario’s largest export market—the United States—appearances can be deceiving. According to Ontario’s Financial Accountability Office (FAO), the value of Ontario’s exports in 2015 was indeed up 10.5 per cent—on top of a gain of eight per cent in 2014.

However, Canadian exports to the U.S. are often priced in U.S. dollars and therefore, with the depreciation of the Canadian dollar, Ontario exporters receive more Canadian dollars for the same volume of exports. Hence, the value of exports is up. More to the point—while the value of Ontario’s exports to the U.S. priced in Canadian dollars grew by 12.5 per cent in 2015, the volume of exports did not increase significantly. As the FAO concluded in its Feb. 5, 2016 commentary, “… the anticipated boost to Ontario’s net exports has yet to materialize as we head into 2016.”

While Ontario has seen some improvement in its economic performance, the fact remains that it’s still performing weakly compared to other points in its economic history. Its manufacturing sector has not recovered from the loss of employment and capacity experienced over the last decade, export volumes are essentially flat, and non-residential construction has been less than robust in most regions of the province. Ontario is not out of the woods yet.