The recently-released 2018 federal budget calls for growth in both spending and revenues.

It’s remarkable that despite what has been a relatively strong economy, there has not been an effort to do more to speed the return to a balanced budget. Indeed, when you compare the 2018 budget to what was laid out in the Fall 2017 Economic Statement, the Trudeau government has decided to use the bounty of more robust growth and increased revenues to simply boost spending.

The first chart below compares the projected average annual growth rates across the 2018 federal budget and the Fall 2017 Economic Statement for the period 2017-18 to 2022-23, for the key summary budget numbers. 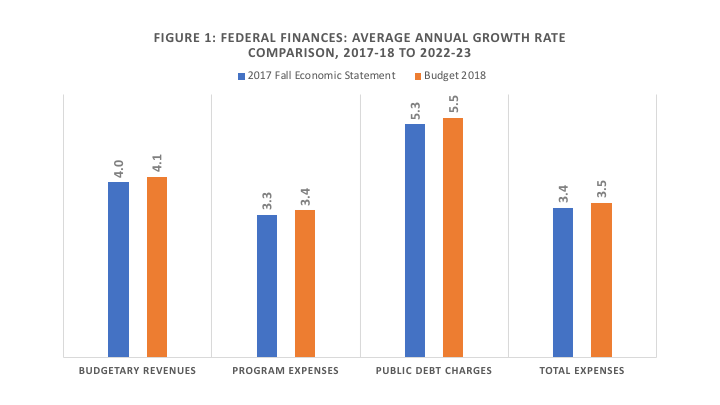 In the Fall 2017 Economic Statement, total tax revenues over the period 2017-18 to 2022-23 were expected to grow at an annual average rate of 4.1 per cent, but the 2018 budget now places that at 4.2 per cent. However, the average annual growth rate for personal income tax revenues, which account for half of total federal revenues now, goes from 4.7 per cent to 4.8 per cent. 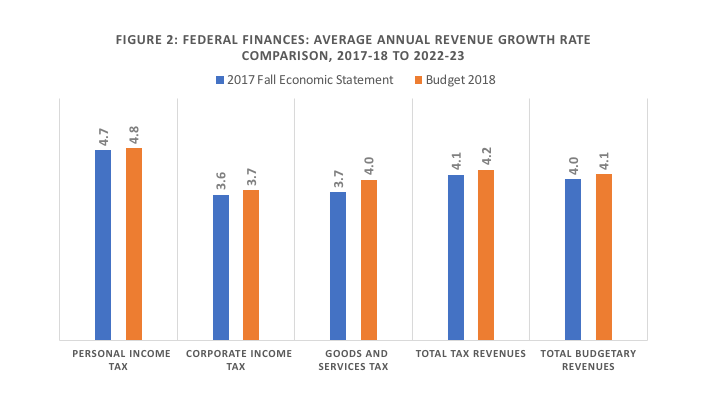 So, what’s the main takeaway here?

The shape of federal fiscal things to come is continued deficit financing during a period not expected to be marked by recession. The federal government has chosen to continue spending more than it takes in, despite the recent relatively favourable economic performance.

We will see another $117 billion added to the federal net debt and this will be accompanied by an increase in the personal income tax burden, as measured by the share of federal personal income tax revenues- to-GDP. Clearly, using the bounty of favourable economic performance in this manner is not sound stewardship of the public purse.