This second post on Ontario’s lack of prosperity focuses on unemployment in the province, a key measure of the performance of the labour market. Recall that the first post illustrated the poor economic growth recorded in the province vis-à-vis the rest of Canada. 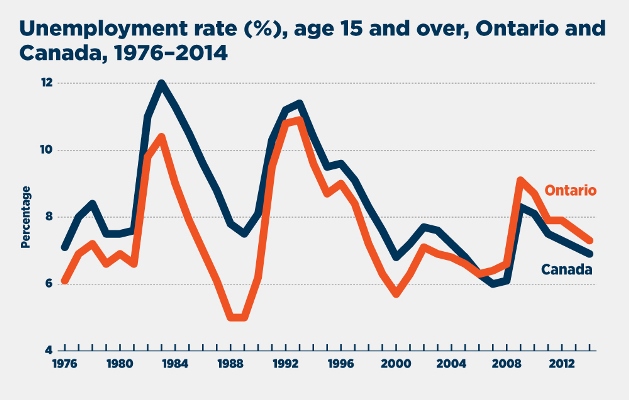 Broader measures of Ontario’s labour market confirm the growing slack in labour demand. Statistics Canada calculates a measure of both unemployment and underemployment, which includes adjustments for involuntary part-time work, discouraged workers, and people waiting to be recalled to work. In 2014, this measure of labour-market slack stood at 10.7 per cent in Ontario, the highest of any province outside of the Atlantic region. Of this 10.7 per cent, two-thirds was accounted for by the conventional measure of unemployment, with the remaining third reflecting various measures of underemployment.

Employment was particularly weak in its private sector. The only reason unemployment in Ontario did not surge well above the national average was that the participation rate almost kept pace with the falling employment rate, receding 2.6 points. This also was the largest drop in the country.

Like measures of income performance, Ontario’s labour market performance is lagging largely due to poor policies in the province that make it less competitive and harder (more costly) to do business.