The Institute recently released a major study by former chief analyst at Statistics Canada, Philip Cross, assessing the state of Ontario within Canada. The results are startling in terms of the economic decline of one of Canada’s founding and traditionally most prosperous province. This is the first of three blog posts that explore specific measures contained in the larger study.

This blog post focuses on economic growth and GDP, which measures the value of all goods and services in the economy. It is one of the broadest measures of income available. The results for Ontarians are discouraging to say the least. 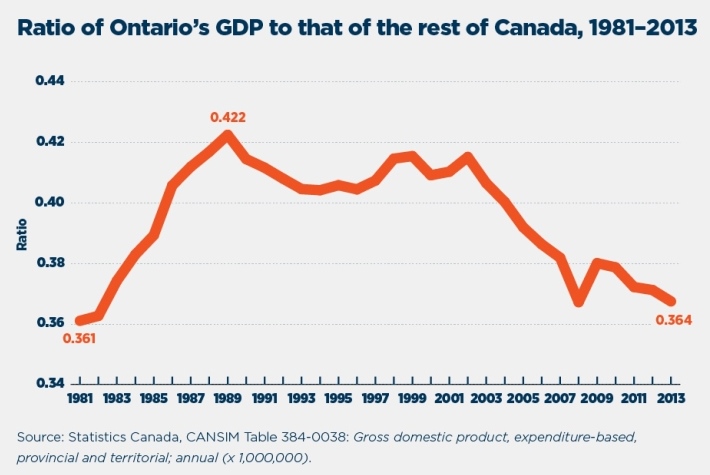 Starting in 2003, Ontario’s real GDP growth dropped below the average in the rest of Canada and it has consistently lagged over the ensuing decade. As a result, growth in Ontario between 2002 and 2013 was 15.8 per cent compared to 26.8 per cent elsewhere in Canada. All of the reversal of the gap between growth in Ontario and the rest of Canada originated in slower growth in Ontario, from an annual average of 3.2 per cent between 1989 and 2002 to 1.4 per cent after 2002 (growth elsewhere decelerated from 2.9 per cent to 2.4 per cent). Nor is the shortfall mostly due to the recession; this gap in growth of 11 percentage points was almost equally spread between the years before and after 2008 (5.1 percentage points compared to 4.8 percentage points). Every percentage point of growth lost by Ontario represented $7 billion of GDP in 2013.

Ontario’s dwindling share of the economy in Canada cannot be dismissed as just the inevitable by-product of the resource boom in some other provinces. For one, Ontario also has a large resource base. It is home to Canada’s largest utilities and mining industries (excluding oil and gas) and its third-largest forestry industry. Ontario is unmatched in downstream manufacturing that process resources, notably
primary metals, lumber, pulp and paper, petroleum refining, food, chemicals and non-metallic minerals.

The reality is that poor policy in the province, particularly with respect to competitiveness and the cost of doing business have resulted in less investment and thus less prosperity.