The last 20 years have seen a remarkable shift in the balance of spending between Ottawa and the provinces.

While Ottawa has reined in its spending, the provinces have soared to new heights. According to data available in the Federal Fiscal Reference Tables, both the provinces and the municipalities have had more robust spending growth than Ottawa over the last two decades. Indeed, after adjusting for intergovernmental transfer payments paid out, for every dollar Ottawa spends, the provinces and municipalities combined now spend nearly three dollars.

In 1991, at $142 billion, provincial-territorial spending net of transfers to their municipalities was close to federal spending. However, by 2014, provincial-territorial spending net of transfers had grown to $370 billion—nearly twice that of the federal government—with an annual average growth rate of over four per cent. Local government spending was $65 billion in 1991 and reached $159 billion by 2014—with a growth rate just below that of the provinces. (See chart below) 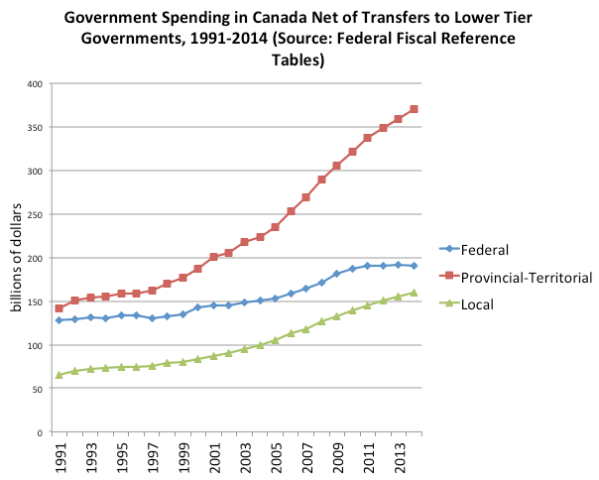 Provincial-territorial government expenditures and those of their municipalities have grown rapidly for three reasons. First, they have seen both federal transfers as well as own source revenues grow over time.

Indeed, from 1992 to 2014, the growth rate of own-source revenues at the provincial-territorial level has averaged 4.4 per cent annually compared to 3.5 per cent for both the federal and local government levels. Grant revenues for the provinces have increased at an average annual rate of 4.9 per cent while for local government it has been four per cent.

Third, despite their growing net debt, the provinces and territories have seen flat debt servicing costs as a result of historically low interest rates yielding them additional fiscal capacity, which has also been used to increase spending.

Despite their continual cries of tightened fiscal circumstances, the provinces have continued to increase their spending by running deficits, increasing their own revenue sources, taking advantage of increased federal transfers and spending the fiscal capacity afforded by lower debt service costs. Their municipalities—which are creatures of the provinces under the Canadian federal system—have gone along for the ride.

While some of the provinces—notably Quebec—have recently taken steps to rein in spending and move towards balanced budgets, others, such as Ontario, have been laggards in this endeavour.

Then there is Alberta, which has embarked on a new road to debt in its most recent budget.