In spring, the thoughts of provincial governments turn to budgets, and all the provinces have now unveiled their 2018 budgets starting with New Brunswick in January and most recently Saskatchewan last week.

TD Economics maintains a very nice Government Finance and Policy webpage; summaries of the budgets to date are available there. A select overview of some of their numbers tell some interesting stories about the current state of provincial finances to date.

The first chart below looks at the anticipated provincial government revenue growth for 2018-19 and they rank from highs of 4.6 per cent and 4.5 per cent for Prince Edward Island and Newfoundland and Labrador to a low of 0.6 per cent for Nova Scotia. Given the uncertain economic prospects as a result of uncertainty in world trade and the prospect of rising interest rates, it’s not surprising that revenue growth for Quebec, Alberta, New Brunswick, Ontario and Nova Scotia is expected to be at best around 2 per cent.

The reasons for the optimism in Newfoundland, P.E.I and Manitoba are less clear but may have something to do with anticipated rebounds in resource prices, though P.E.I. forecasts an almost 9 per cent increase in federal transfers. As for British Columbia, it’s bringing in some revenue enhancement measures. 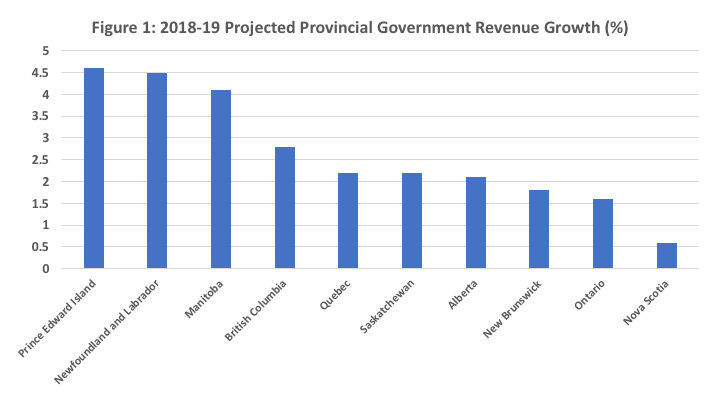 However, slowing revenues does not appear to have put a crimp in the plans for expenditure growth. While average revenues across these provinces is expected to grow at 2.7 per cent, total provincial (operating) government expenditures will grow at an average of 3.0 per cent. It should be noted that many provinces are shifting spending to their capital budgets, making this an underestimate of actual total expenditure increases.

Ontario, on the other hand, saw a 4.7 per cent increase the previous budget year and has decided to build on that. Given past spending behaviour was much higher, it’s not clear whether any projected restraint in operating spending will in fact materialize as planned. 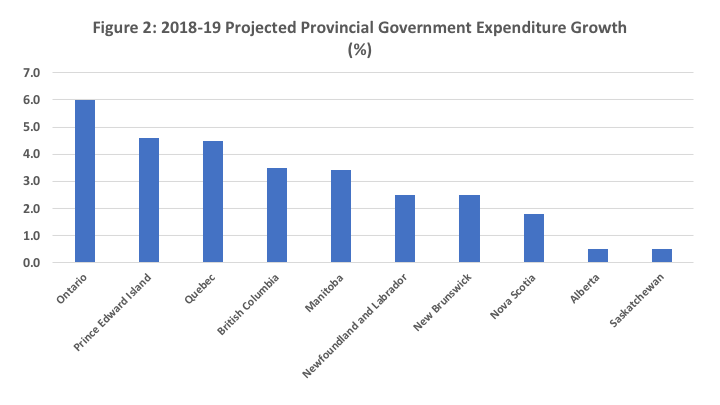 When it comes to the budget balance, most of these provinces are running deficits for 2018-19 with the exceptions being Quebec, B.C., Nova Scotia and P.E.I. The third chart shows the fiscal balance ranges from an anticipated operating surplus of $904 million for Quebec to a deficit of $8.8 billion for Alberta. Alberta’s deficit situation is nominally worse but also relatively worse than Ontario’s, given its smaller population and GDP. 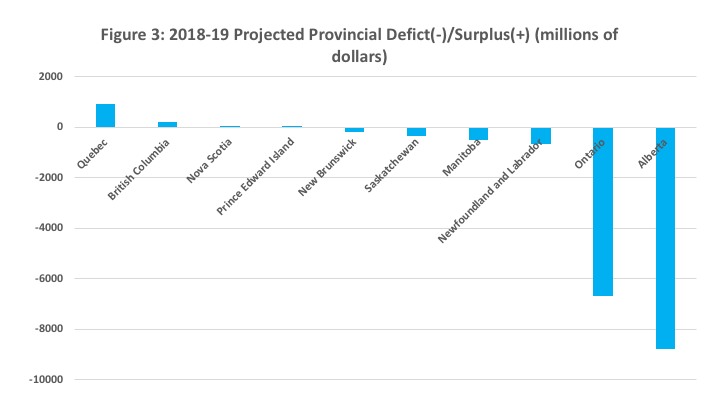 Despite some operating surpluses, all provinces in this comparison will see an increase in provincial net public debt (government liabilities minus financial assets) this year. This is because even with operating surpluses, provinces are adding debt as a result of planned capital spending. As the final chart illustrates, the largest increase is for Alberta, which will see its net financial debt grow from $20.3 billion in 2017-18 to $30.5 billion in 2018-19—an increase of 50 per cent. 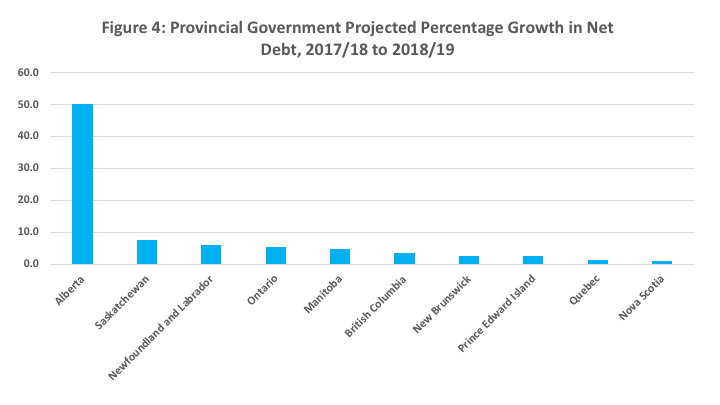 What’s notable in these numbers is what appears to be some improvement in the public finances of Quebec and Nova Scotia, especially with respect to deficit and net debt situations, and B.C., which projects operating surpluses until 2021-22.

Ontario, conversely, is looking at deficits for the next six years according to its most recent budget. Over the period 2018-18 to 2023-24, Ontario is projected to run annual deficits ranging from $6.7 billion to $2.5 billion for an accumulation of $31.9 billion in deficits. As for Alberta, it appears to have embarked on a path similar to Ontario with continuous deficits projected for years to come.