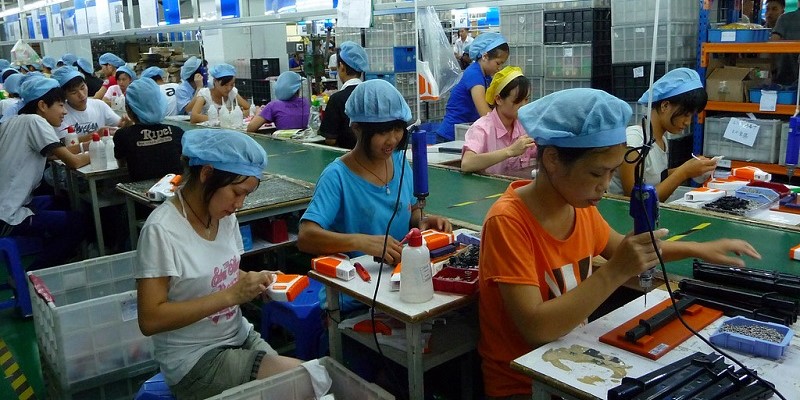 The WTO recently published revisions and updates to the “Trade in Value-Added and Global Value Chains” profiles that it produces with the OECD. You can see the press release here, the explanatory notes here and the actual statistical profiles here. For obvious policy reasons, I was especially interested in the numbers for Canada, China and the United States.

Interest in “value-added trade” really took off a decade ago after people started talking about “who makes the iPhone”? China exports essentially finished iPhones and her exports therefore get credited with the total value of the phones at export. But China doesn’t make everything that goes into the iPhone, including hard-to-value research and design intangibles that originate in the U.S.

True Chinese value-added in iPhones is therefore a lot less than the gross value of her iPhone exports, which suggests China’s big (gross) trade surplus with the U.S. may not be such a problem as it seems. If a lot of what Americans are buying when they buy an iPhone (and similar products) is actually U.S. value added, maybe the trade deficit is partly statistical artefact. (Of course, even if it that’s not the case, the trade deficit still might not be worth spilling national angst over.)

The first set of numbers the WTO presents is for “Domestic value added sent to consumer economy.” That’s your domestic value added embodied in final goods and intermediate inputs that you export to trading partners that consume them directly. You might think of that as being more traditional exporting: we make something, you consume it. In 2015, the latest year for which data are available, such activity accounted for 67.9 per cent of U.S. exports, 63.2 per cent of Canada’s and 64.3 per cent of China’s. There’s clearly not much difference among the three. If this is the opposite of “global value chaining,” i.e., producing components in lots of different countries, then among these three countries the U.S. is least involved in such value chaining, Canada is most involved and China is in between. But in percentage terms, you could throw a blanket over the three countries.

Even so, the numbers may be at least a little surprising. If part of the U.S.’s current protectionist impulse is anxiety that global value chaining is squeezing out U.S. domestic value added (VA), well, the U.S. currently has more domestic VA in its exports than China does.

On this indicator the numbers are 22.2 per cent for the U.S., 17.5 per cent for China and 15.3 per cent for Canada. Just to be clear, the per cent referred to is the percentage of your total export value that consists of this sort of export, i.e. intermediate goods your trading partners process further and sent on to third countries. Again, the differences among the three countries aren’t dramatic and the U.S. is the most active of the three. If you were an American economic nationalist, you might think of this sort of thing as good: your country is exporting value that domestic workers and firms have created. On the other hand, maybe you feel any further processing such exports undergo could and should be done at home.

The third indicator the WTO tracks is “domestic value added re-imported [into] the economy.” In other words, your economy produces value added that gets exported to a trading partner that sends it back as part of an intermediate good that your country imports and which you then work on further and export. In the folklore of Canada’s auto sector, some auto parts get sent back and forth across the Canada-U.S. border as many as seven times during the production of a vehicle. (iPhones glisten but cars are the archetypal GVC.) In fact, this sort of thing seems not that important a phenomenon for the U.S., Canada and China, where it accounts, respectively, for 0.4, 0.2 and 0.6 per cent of these country’s gross exports.

Finally, the WTO looks at the “Foreign value-added content of exports,” which, as the name implies, involves your exporting goods and services that contain foreign value-added you’ve imported. Here are the numbers: U.S. (9.5 per cent), Canada (21.2 per cent) and China (17.3 per cent). Less than $1 in $10 of U.S. exports is foreign content, while more than $1 in $5 of Canadian exports is. And again, China is in the middle.

As is always the case with aggregate data, these leave you hungry for the details of what’s really going on. In fact, the WTO and OECD do provide a good deal more detail—more than enough to get bogged down in probably. But perhaps the most obvious point emerging from the exercise is that although production does cross borders a lot these days, the numbers may not be as high as some of the highest-profile examples might suggest. Moreover, despite their current animosity, the U.S. and China don’t seem all that different in their overall trade tendencies.

But probably the most important point not to lose sight of is that the patterns discernible in the data are the result of business firms trying to operate as efficiently as possible. Not to put too fine a point on it, but in many U.S. production processes, relying on foreign value added for one part of the process may make possible the export of goods and services that use lots of U.S. labour, capital and know-how in all the other parts of the process. If so, kicking off a trade war with higher tariffs may end up reducing the demand both for U.S. exports and the domestic value added that goes into them. Tariffs may well subtract value that trade has added.