The recent provincial budgets released by the Quebec and Alberta governments are a study in contrasts of government debt.

Not too long ago, Quebec was clearly the “government debt” problem child of confederation while Alberta was unique in that it held no net debt at all.

In fact, as recently as 2015/16, Alberta was the only province in Canada with financial assets exceeding government liabilities. Quebec in contrast was the most indebted province in terms of per person net debt. The gap in net debt between Alberta and Quebec was more than $23,000 per person.

However, 2015/16 was an important year in the fiscal histories of both provinces. Quebec balanced its operating budget for the first time in seven years, beginning a string of surpluses that continued to this week’s budget. This puts the province in a position to start reducing its debt burden slightly, and indeed, per person net debt dropped from $22,402 to $21,580 last year (2017/18).

For Alberta, 2015/16 was the last year the province’s financial assets exceeded its debts. Since then, Alberta has been a net debtor and its net debt per person climbed to $4,729 in 2017/18.

This brings us back to the most recent budgets (both released this month), which will continue this trend. The chart below shows the projected net debt per person in Quebec and Alberta from 2015/16 to 2022/23 (the last year of projected net debt for Quebec). 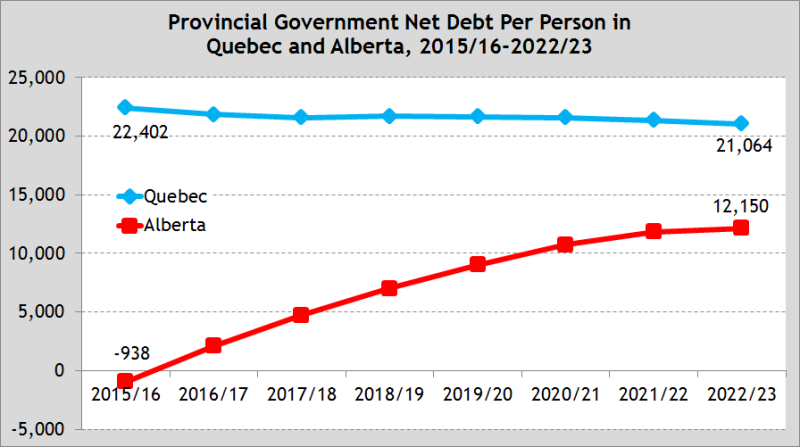 In contrast, debt per person is projected to grow by 157 per cent in Alberta over the same period, from $4,729 to $12,150. By 2022/23 the gap between Alberta and Quebec—which, again, was approximately $23,000 as recently as 2015/16—will fall to just under $9,000. Make no mistake, there’s still a substantial gap between Quebec and Alberta’s net debt per person, and that gap will likely exist for the foreseeable future, but it’s notable that the gap has closed every year.

This is not to say that Quebec is a model of fiscal rectitude. It’s a high tax jurisdiction that relies heavily on federal transfers (equalization) and there’s still a great deal to be done to strengthen Quebec’s tax and fiscal framework.