The case for federal personal income tax reform in Canada

Canada’s economic performance has been sluggish for many years and is projected to remain modest for the foreseeable term. A tax reform plan that improves incentives to work, save, invest and undertake entrepreneurial activities can help enhance economic growth. Indeed, a large body of research shows that broad-based reductions in marginal tax rates have beneficial economic effects. One U.S. study, for instance, finds that a one percentage-point cut in the average personal income tax rate raises real GDP per capita by 1.4 per cent in the first quarter of the reforms and by up to 1.8 per cent after three quarters. This type of economic boost could be a powerful shot in the arm for the Canadian economy.

Past federal governments of different political persuasions, both Liberals and Conservatives, have made the case for lowering marginal tax rates based on the potential for economic gain. In 2005, then-Prime Minister Paul Martin’s economic plan, A Plan for Growth and Prosperity, stated that: “Lower personal taxes would… provide greater rewards and incentives for middle- and high-income Canadians to work, save and invest.” Former Prime Minister Stephen Harper’s 2006 plan, Advantage Canada, also stressed that “Canada needs lower personal income tax rates to encourage more Canadians to realize their full potential.”

Yet despite what appears to be political consensus, there has been almost no progress in making the federal personal income tax system more competitive and part of a pro-growth agenda. In fact, the federal and many provincial governments have raised marginal tax rates recently, particularly on the country’s highly skilled and educated workers, including entrepreneurs and business professionals. The current federal government, for instance, created a new top personal income tax rate of 33 per cent (see Table 1 below), a four percentage point hike over the previous top rate of 29 per cent. Several provincial governments have also raised their top tax rate in recent years. 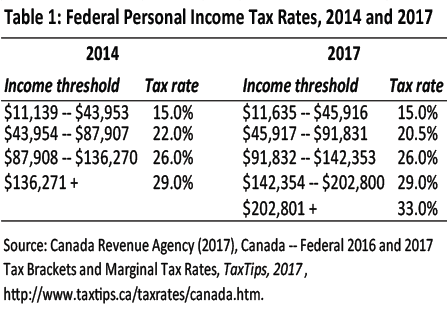 As a result, Canada’s combined federal and provincial tax rates, which were already uncompetitive internationally, have become even less so. The competitive pressures on Canada to enact significant personal income tax reform will intensify in coming years, especially if the United States enacts its own PIT reform, which is possible under the new Trump administration.

An additional reason why Canada is due for fundamental PIT reform relates to the complexity of the personal tax system and the opportunity for simplification. The current personal income tax system has grown increasingly complex over the years and now consumes considerable resources in the form of compliance costs.

One of the main sources of the tax system’s complexity is the proliferation of credits, deductions and other special preferences (known as “tax expenditures”). While tax expenditures can reduce an individual’s tax bill, they add to the cost of compliance because claiming a tax credit or deduction requires keeping records, ensuring eligibility, and perhaps hiring an accountant to ensure one does not miss out on any tax benefits. And the economic bang of tax expenditures is low, as they provide few behavioural incentives related to work, savings, investment, or entrepreneurship. Instead, tax expenditures simply subsidize behaviour that taxpayers would likely have undertaken anyway. More concerning, however, is that they narrow the tax base, resulting in higher marginal rates. The consequence is a less efficient and uncompetitive personal income tax system.

…the Government remains committed to ensuring federal tax expenditures are fair for Canadians, efficient and fiscally responsible. Individuals and businesses have expressed concerns related to the efficiency and fairness of the tax system, and how the increasing number of tax expenditures has made the federal tax system more complex. In the coming year, the Government will undertake a review of the tax system to determine whether it works well for Canadians, with a view to eliminating poorly targeted and inefficient tax measures.

Although the government is to be commended for seeking to eliminate some tax expenditures, it should use its review as an opportunity to reform taxes—concurrently reducing tax rates broadly—not to generate more revenues and raise the tax burden on Canadians. Indeed, eliminating a large number of tax expenditures would broaden the tax base and allow the government to use the resulting resources to lower marginal tax rates. Such tax reform would simplify the system and lead to a less distortionary personal income tax regime, laying the foundation for more rapid economic growth.

A study published in 2015 provides a detailed blueprint for federal personal tax reform. While the federal PIT system has changed since the study was published, the basic approach is relevant and can serve as a guide for reform.

The analysis starts with the fact that tax expenditures cost the federal government approximately $124 billion in lost revenue in 2013/14, close to the $130 billion the government collects annually in personal income taxes. Of the $124 billion in annual tax expenditures, Lammam et al. (2015) identified 68 for removal including the Children’s Arts and Fitness Tax Credits, the Public Transit Tax Credit, and the Labour-Sponsored Venture Capital Corporations Credit, to name a few. The total savings from eliminating the 68 tax expenditures would have been $20.2 billion.

At the time of study, there were four federal personal income tax brackets (see Table 1 above). Since then, the second lowest rate was reduced from 22 per cent to 20.5 per cent and the government added a new top rate of 33 per cent. Nonetheless, what could the elimination of $20.2 billion in tax expenditures have meant for the PIT?

It would have allowed the federal government to completely scrap the two middle rates (22 per cent and 26 per cent). An overwhelming majority of Canadians could have faced a single 15 per cent marginal tax rate, while only a small minority—roughly 2 per cent of tax filers—would have faced the higher rate of 29 per cent. Had the top rate of 29 per cent been kept at its 2014 income threshold, this tax reform package, when fully implemented, would have cost $21.4 billion (in static terms, without accounting for the behavioural changes that would ensue from lower marginal tax rates).