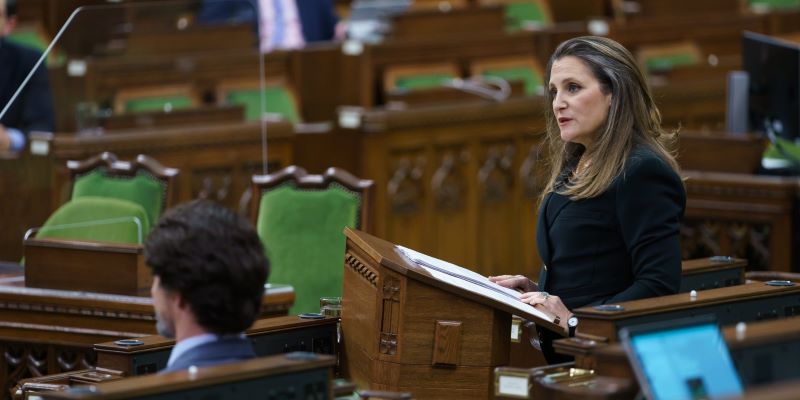 You’ve got to hand it to the federal Liberals, they are masters of communication. The news stories heralding the new national childcare policy (announced Monday in Budget 2021) are filled with graphs and charts on the median cost of childcare by major city. The point of the graph is to show everyone how much cheaper life is in Quebec for this aspect of spending than any place else in the country.

To ensure that the rest of us have the same low-cost high-quality care for our children as people in la belle province, the government has earmarked $30 billion over five years. This is accepted by journalists as a fait accompli and the story ends.

Looking at Budget 2021, that’s about all we get in terms of detail. Sure, Finance Minister Chrystia Freeland talks a good game about how there’s “agreement across the political spectrum” that this is the policy we need now, and how it delivers a “jobs-and-growth hattrick” and it being a “feminist economic policy” and “smart economic policy.” But the document is rather silent on how national childcare would work.

Indeed, the finance minister only alludes to the fact that this is a cost-sharing proposal that must be negotiated with the provinces—the same provinces who face escalating costs in health care, their own ballooning budget deficits, and voter frustration with increasing lockdowns and slow vaccine rollout.

The so-called “new” childcare and early learning policy is new only insofar as it’s slightly different than the policy heralded in 2004 by then-prime minister Paul Martin.

There are two differences.

Where 2021 Liberals plan to spend $30 billion over five years, Liberals in 2004 planned to spend $5 billion over five years. And Paul Martin, unlike Chrystia Freeland, wasn’t going to wait until all provinces signed on. He would negotiate with each province and see if there were any takers. He had one—Manitoba. Nonetheless, he was confident it would work, as he stated at the time. "This is a national priority, and we are going to help make it happen."

Freeland is equally bullish, saying “I make this promise to Canadians, speaking as your minister of finance and as a working mother: We will get it done.”

So, there you have it; this will get done.

Rather than a policy document that lays out the objective, rationale and plan, Budget 2021 can be read as the opening salvo in a public relations war with the provinces. Freeland has set her government up as the saviour of working mothers and families with small children. She has used the pandemic as a policy window that increases government spending, not just as a response to the crisis but for the long-term.

It will be interesting to see how negotiations pan out. On one side you have the first female finance minister, on the other you have a group of male premiers (albeit some are Liberal and NDP). However, the premiers didn’t get what they asked for in the budget.

The premiers asked the Trudeau government to commit to a 35 per cent cost-sharing of health care. What they got was a onetime increase of $4 billion to help with COVID. In their pre-budget consultation document, they say: “Most importantly, the shift to 35% of provincial-territorial health spending would not only stabilize the current federal cost share but bring the federal support closer to the original 50-50 cost-sharing.”

It’s a double-edged sword. If they don’t sign on to the childcare program, they face an electorate badly beaten by the pandemic who would probably appreciate lower childcare costs. If they do sign on, the provinces may ultimately get stuck with a greater chunk of the bill when Ottawa—faced with a debt crisis in the future—could reduce its share of childcare costs. Either way, the premiers risk looking like the bad guys.

The risk to the federal Liberals is rather low. They can use negotiations with the premiers to aid their next election bid, painting the premiers as anti-feminist. It’s also a great distraction from ballooning federal budget deficits and debt.