What The Handmaid’s Tale can teach us about gender inequality 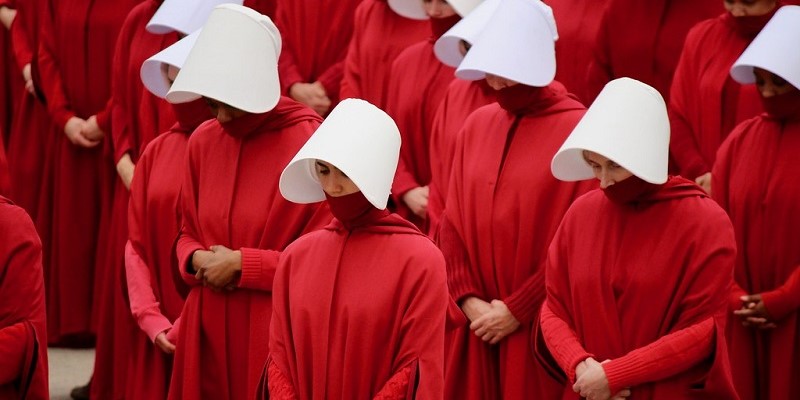 The Handmaid’s Tale, both the popular Hulu series and the classic novel by Margaret Atwood, has become a symbol for modern feminism and the global fight for gender equality. The story, set in a dystopian version of our not-so-distant future, underscores the importance of granting all people in society equal access to economic freedom and other human rights.

In The Handmaid’s Tale, the world is suffering from multiple crises. An unnamed environmental disaster renders much of the land toxic and unsuitable for much of anything, let alone for the production of food. At the same time, fertility rates around the globe drop to dangerously low levels, resulting in negative population growth.

The widespread panic and uncertainty about the future opens the door for an authoritarian regime to rise to power in the United States. This theocratic state, referred to as Gilead, is a centrally-planned patriarchal society largely governed by religious law.

Early on, the government of Gilead strips women of their human rights, particularly their economic rights, by restricting women’s access to financial institutions by closing all the bank accounts held by women and turning the contents over to husbands or male family members. Shortly after that, employers are forced to fire all female employees, ending women’s right to work outside of the home. Their ability to travel freely within and outside of the country disappears shortly after. One by one, their rights are stripped away.

This was no accident—when people lack access to economic rights, it becomes more difficult to fight back against an oppressor (whether it be government, a spouse or legal guardian). By losing their property rights, freedom of movement, freedom to work and earn an income, Gilead’s women have no means to build a financially secure future of their own design. Further, it means they have little ability to flee this horrific situation. Lacking both a voice and a means to exit, women have no means to exert the political pressure necessary for meaningful change.

Literally hundreds of peer-reviewed academic studies have found that citizens in economically-free countries are wealthier, healthier and happier than in countries where economic freedoms are restricted. The same is true when comparing countries that grant men and women equal access to economic freedoms with those that severely restrict the rights of women.

In countries where men and women’s economic rights are equally protected under the law, women have higher labour-force participation rates (65.8 per cent compared to only 47.6 per cent) and lower rates of unemployment (8.3 per cent vs. 10.4 per cent), they live on average about nine years longer and are more likely to invest in their education.

Moreover, countries with economic institutions inclusive to both men and women have greater potential for wealth-creation simply by embracing a broader scope of the market. The women of Gilead are unable to participate in almost all voluntary economic exchanges, which means that the entire population of Gilead is unable to benefit from the creative and entrepreneurial activities women would otherwise engage in.

In the TV show, we learn the backstories of several Handmaids—the remaining fertile women who are repeatedly forced to bear the children of the political leaders who are incapable of having children of their own. Most of them had productive careers prior to the rise of Gilead. Offred (June), the main protagonist, worked in publishing. Emily was a microbiologist who taught and conducted research that could have greatly benefitted society. Each one of these women have some comparative advantage to contribute but are unable to due to the lack of economic freedom.

How many of the other Handmaids, the Marthas (the infertile women forced to work as maids in the households of the political elites) and the Unwomen (those sentenced to spend the rest of their lives in forced labour colonies cleaning up toxic waste) were doctors, lawyers, engineers, mechanics or business owners creating jobs and providing goods and services prior to the rise Gilead? Doesn’t everyone bear the opportunity cost of these bad policies? The poor living standards of the vast majority of Gilead’s residents suggest this is the case.

At one point in the story, Commander Waterford (one of the political elites) justifies the oppressive system by saying to Offred that it’s going to create a better society, and achieving a better world requires making things worse for some people.

But again, under a system of economic freedom, this is not the case. Trade is what economists call a positive sum game—in other words, voluntary exchanges must be viewed as beneficial to both parties involved otherwise no trade would take place. The ample research about economic freedom’s impact on human flourishing provides empirical evidence to support that argument.

Those governing Gilead would likely object, claiming that a system that restricts women’s economic freedom is necessary to deal with the severe problems plaguing their society. But I wonder how different the story might be if Gilead’s government embraced economic freedom as an alternative to their societal problems? For example, if infertile couples offered to pay the fertile women for carrying their children, many of them would gladly offer their services in exchange for suitable compensation.

The one silver lining to Gilead’s strategy of turning away from economic freedom is that it embraced an economic system inconsistent with human flourishing, and this should ultimately hasten its downfall.