Who suffers most from high energy prices in Canada?

We all know that humans consume a lot of energy. It lets us cook our food, heat our homes, clean our clothes, and get to work. In fact, using energy to convert resources and provide goods and services is responsible for a lot of our economic well-being. But prices for energy goods such as electricity have risen quickly over the last 10 years, outpacing growth in the price of other goods. And Canadian families only recently received some relief on their gasoline bills as the falling oil price has rippled through the economy.

High energy bills for basic energy needs such as heating, lighting and running appliances are a substantial expense and burden for Canadian households. In a recent study, we estimated how many Canadian households were living in energy poverty—where energy constitutes 10 per cent or more of household expenses.

But who is hardest hit by pricey power and energy poverty? The poor, of course.

The below chart shows that almost 16 per cent of households earning $27,000 or less, and almost 17 per cent of households earning between $27,000 and $47,700, were in energy poverty when only considering expenditures on energy used within the household. While the 2013 estimates for households in the $27,000 or less income group are slightly lower than in 2010, energy poverty has increased in the $27,000 to $47,700 household income group by 34 per cent. 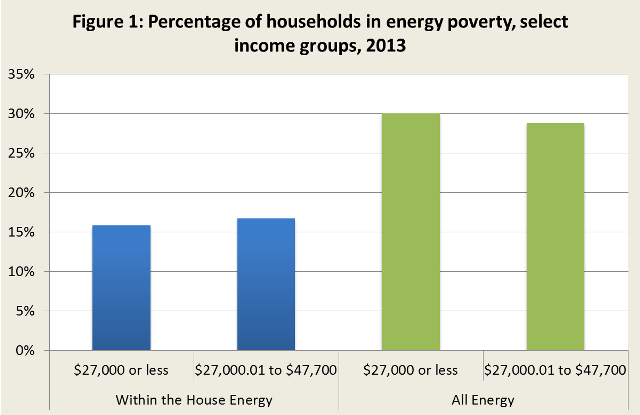 Canada stands in the midst of major changes to our energy systems; some changes driven by technology, but others driven by environmental and climate policies. Many of these policies have the potential to raise the costs of power, and policymakers should carefully consider how those policy choices could exacerbate problems faced by families, particularly lower-income households, who are already in energy poverty or those on the cusp of energy poverty.